Salmon are the spirit of the Columbia River

We work to protect and preserve salmon, so they can thrive in their environment.

King of the Reach Salmon Derby

The annual King of the Reach Derby brings together anglers from all over the region to catch wild natural-origin Chinook salmon for inclusion into the Priest Rapids Hatchery Broodstock program. Grant PUD partners with The Washington State Department of Fish and Wildlife and The Coastal Conservation Association each year to help make the event a success.

SALMON IN THE CLASSROOM

Teaching the next generation 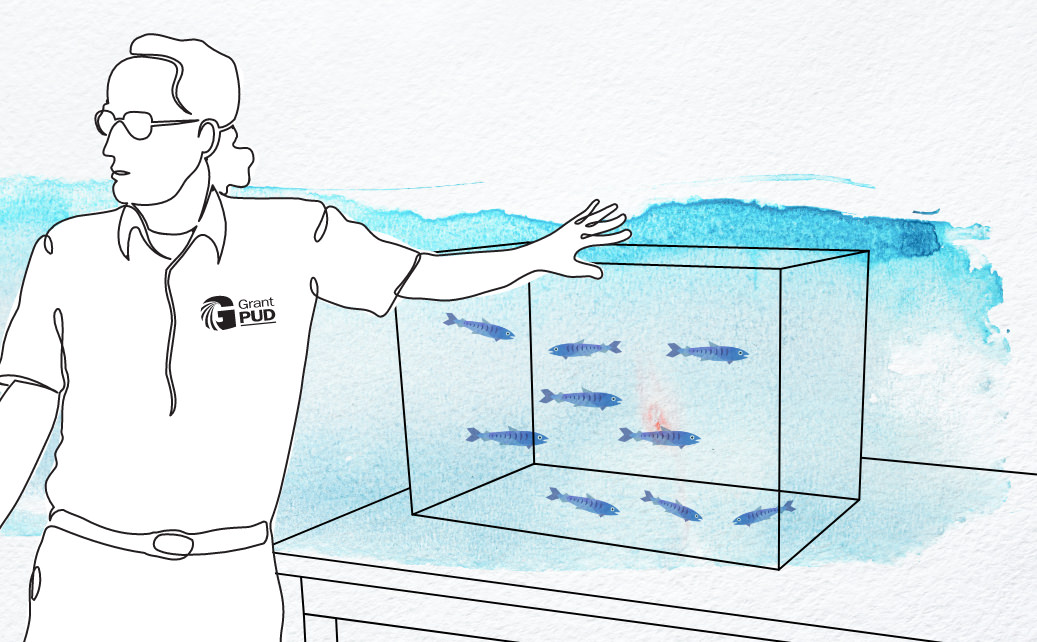 Follow the lifecycle of a Chinook salmon as it makes its way to the ocean and back.

The Columbia River is legendary for producing salmon. Salmon are called “anadromous fish,” because they migrate from fresh water to the ocean where they mature and then return to fresh water to spawn the next generation. Learn what Grant PUD is doing to help salmon as they journey to the ocean as young fry and return as mature adults to spawn the next generation of salmon.

Spawning takes place in late summer and fall each year. A female Fall Chinook salmon lays up to 4,500 eggs in a gravel nest called a redd. After the dad salmon fertilizes the eggs, the mom covers the redd with gravel. 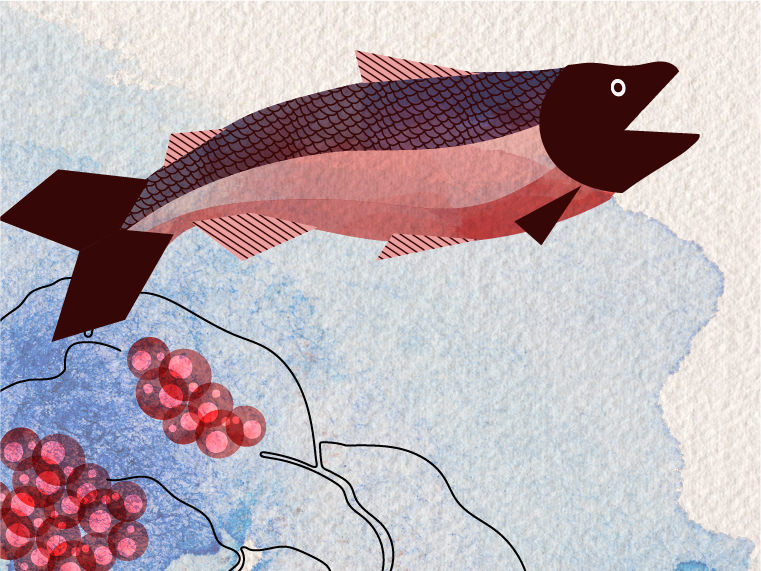 The egg hatches into a tiny larvae called an alevin. The alevin has a large, orange yolk sac below it belly which contains a balanced diet of protein, sugars, vitamins and minerals. Kind of like a bowl of cereal they carry with them. 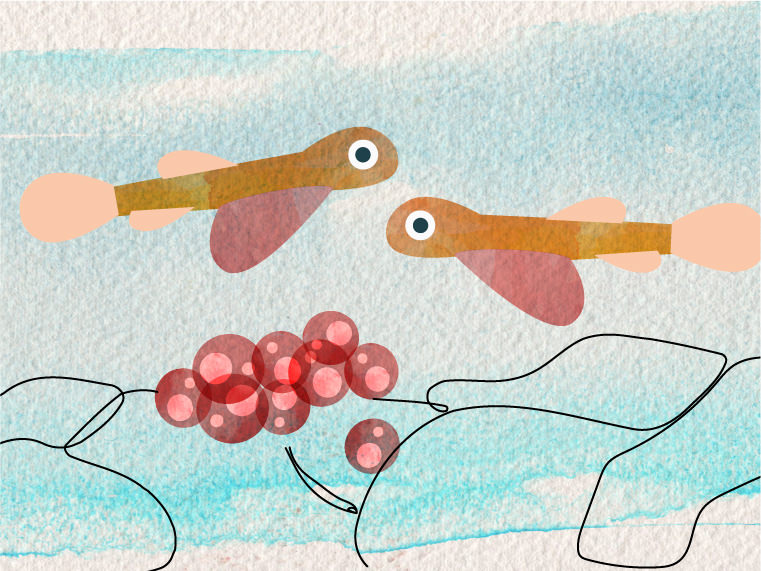 The yolk sac gets eaten while the alevin changes to a tiny fish called a fry, less than an inch long. The fry then begins to look for food on its own. 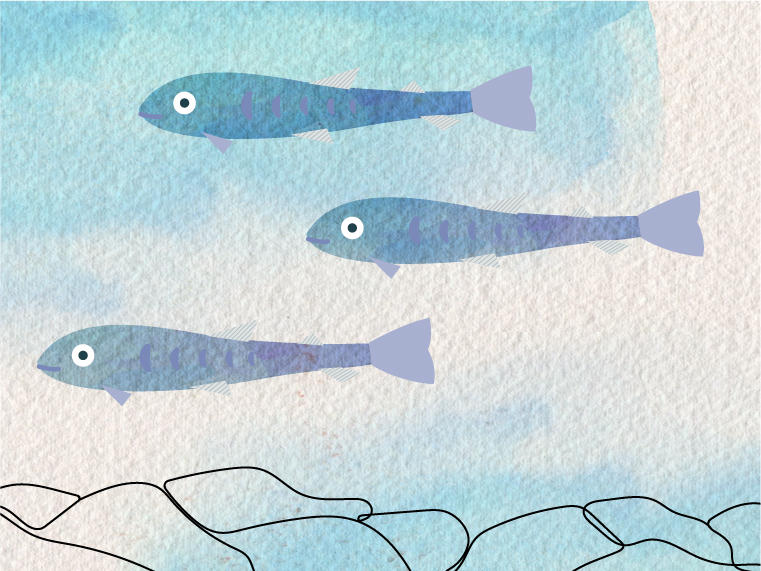 In about four months, the fry will have grown to about the length of an adult human’s finger, and they are called fingerlings. They begin to swim downstream to the ocean. 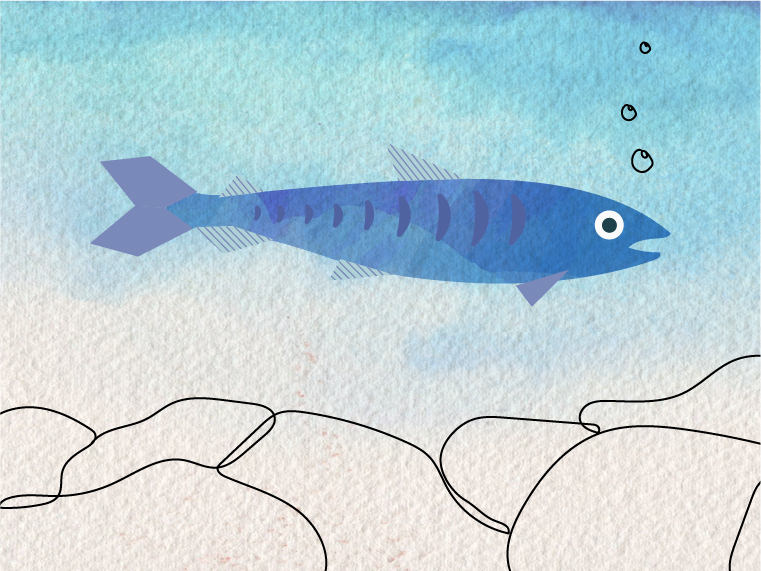 Journey to the Pacific Ocean

The young salmon’s journey to the ocean is full of obstacles. Only about 3 in 1,000 survive the journey. Ducks, herons, kingfishers, other birds and wildlife eat young salmon. Other fish like northern pikeminnow like to live in the waters surrounding the hydroelectric dams and feed on the small salmon as well. The smart, young salmon travel at night to avoid these natural predators. The fish must also navigate their way past hydroelectric projects on the Columbia River. 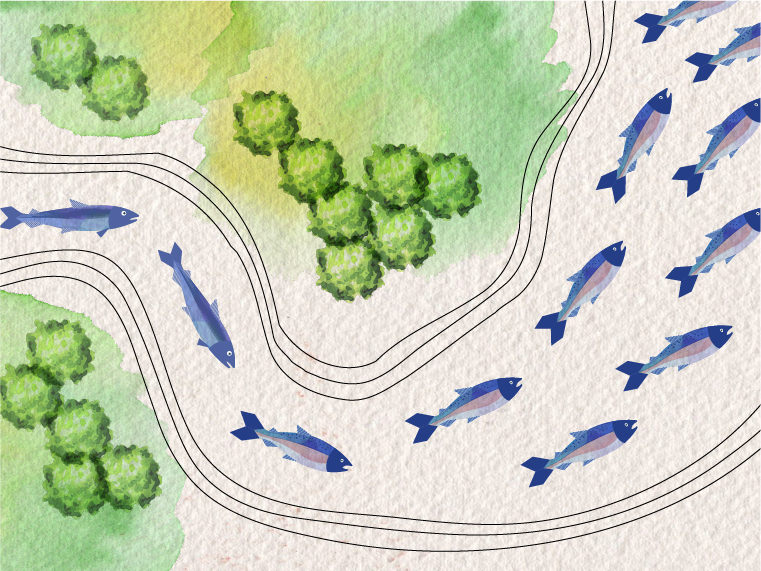 As the baby Chinook salmon moves downstream, it imprints the smells of the stream where it hatched as well as different water bodies on its journey to the ocean. This homing skill will guide the fall Chinook salmon back home after it spends two to five years growing in the ocean. As the fingerling gets closer to the ocean’s salt water, it makes significant physiological changes to become a smolt. 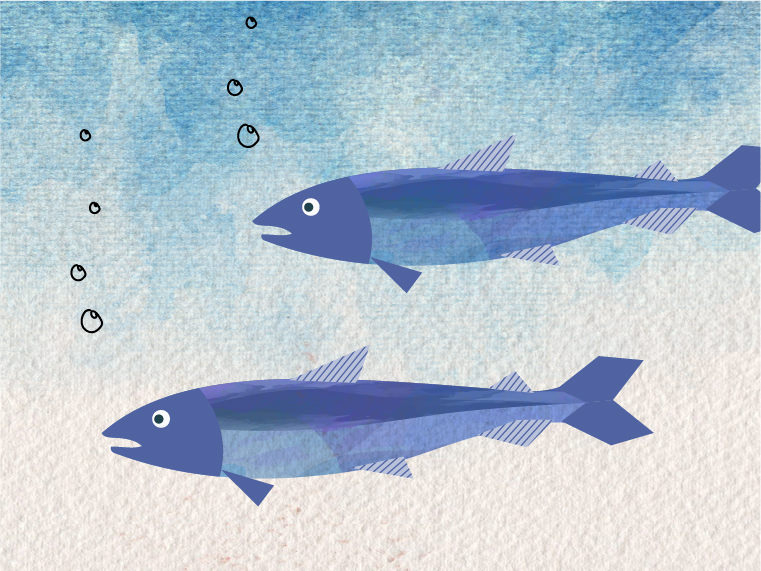 Life in the Pacific Ocean

Once they reach the Pacific Ocean, young salmon feed on zoo-plankton, shrimp, crustaceans, anchovies and herring, as well as other fish. In two to five years, fall Chinook salmon can grow to weight over 20 pounds. 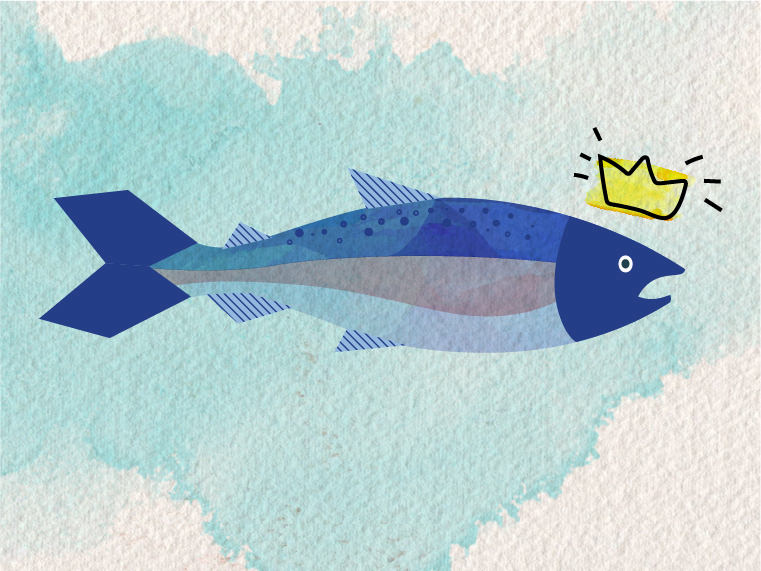 Every salmon has its own time to return to the fresh water and its birth stream to spawn. Once that cycle is complete, the male and female salmon die. Their bodies decay in the streams and provide food for all kinds of other animals. That’s the cycle of life. 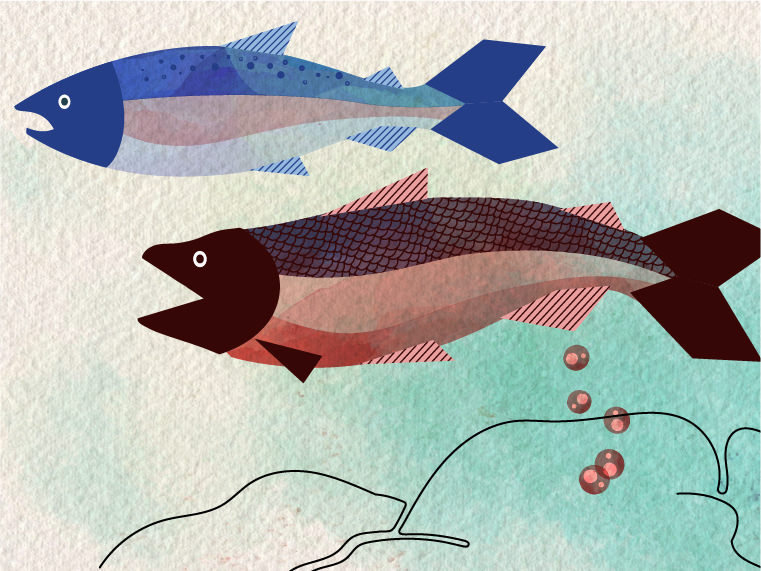 The river is alive

Learn more about the three main species of ocean-going salmon and steelhead trout that travel in the Columbia River each year. 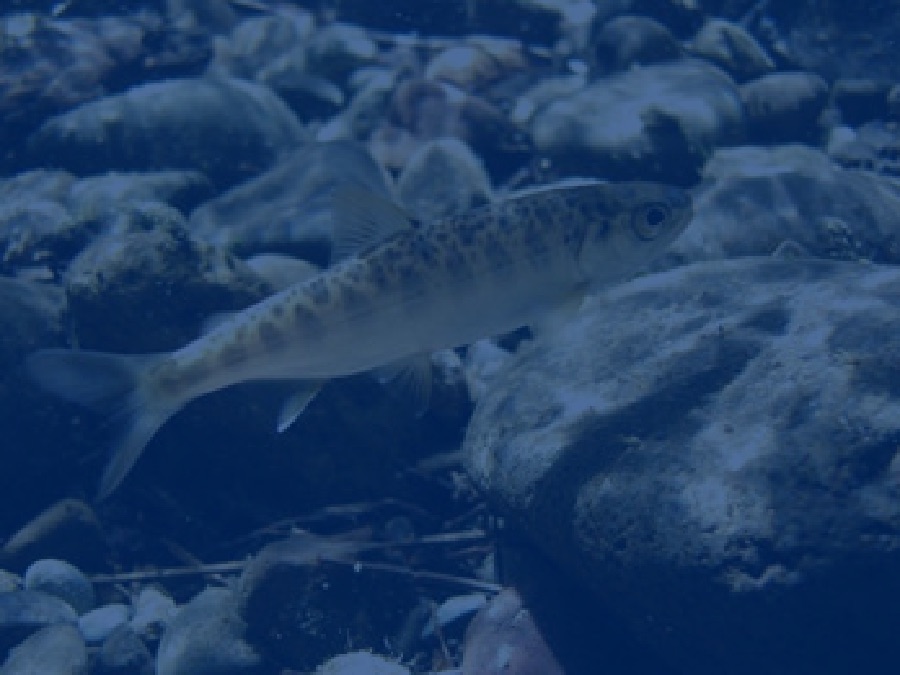 Chinook salmon are a very important species of the Pacific Northwest. The largest of all Pacific salmon, Chinook (also called king salmon) provide a food source for a diversity of wildlife and are also highly valued by people who harvest salmon commercially, recreationally, and for culturally significant purposes. Most Chinook salmon live about three to seven years, spending their first year or so in freshwater habitat. They then move to the estuaries and open ocean where they spend two to four years feeding before they make the return journey to spawn and die. 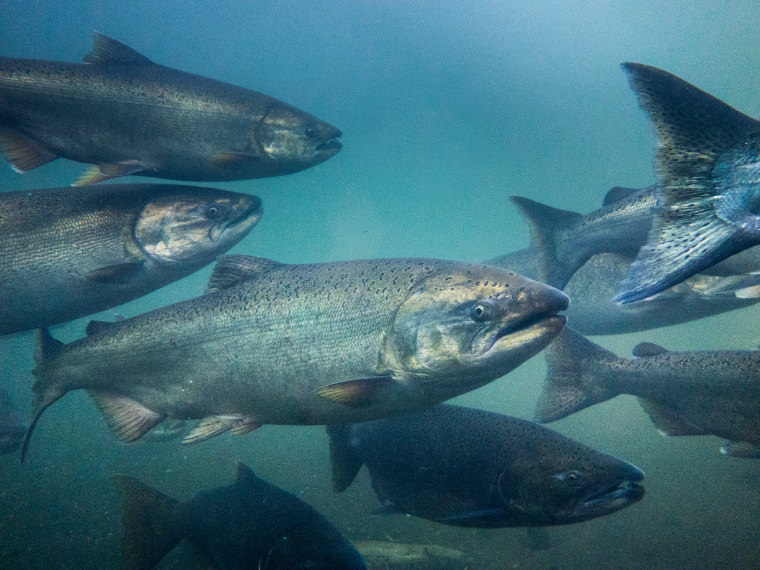 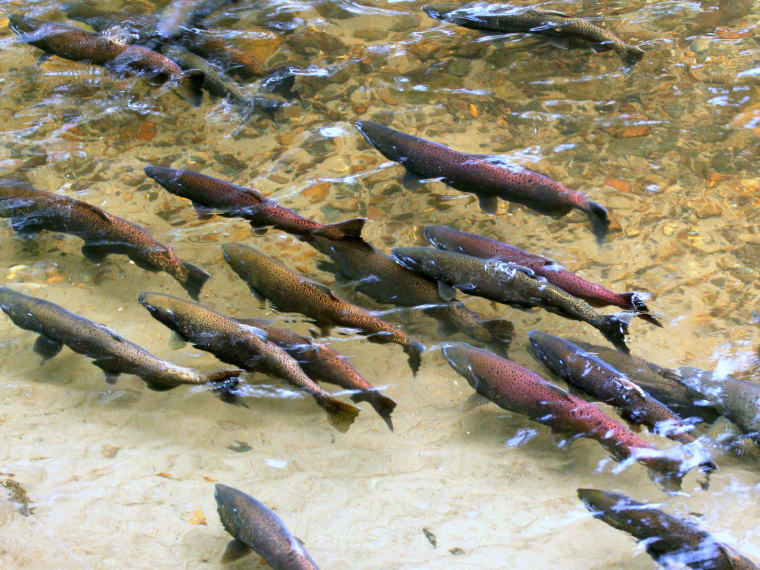 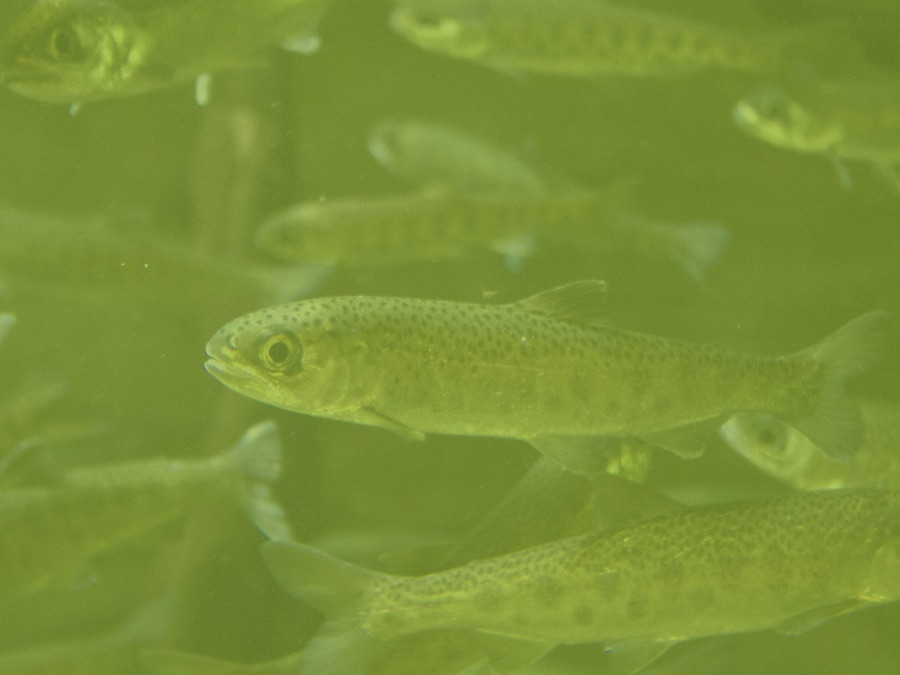 Coho salmon are the second largest of the Pacific salmon. They can reach lengths of 35 inches and weigh more than 30 pounds. They are also referred to as silver salmon. In the ocean, coho salmon have dark metallic blue or greenish backs with silver sides and a light belly. Fish spawning in freshwater are dark with reddish-maroon coloration on the sides. 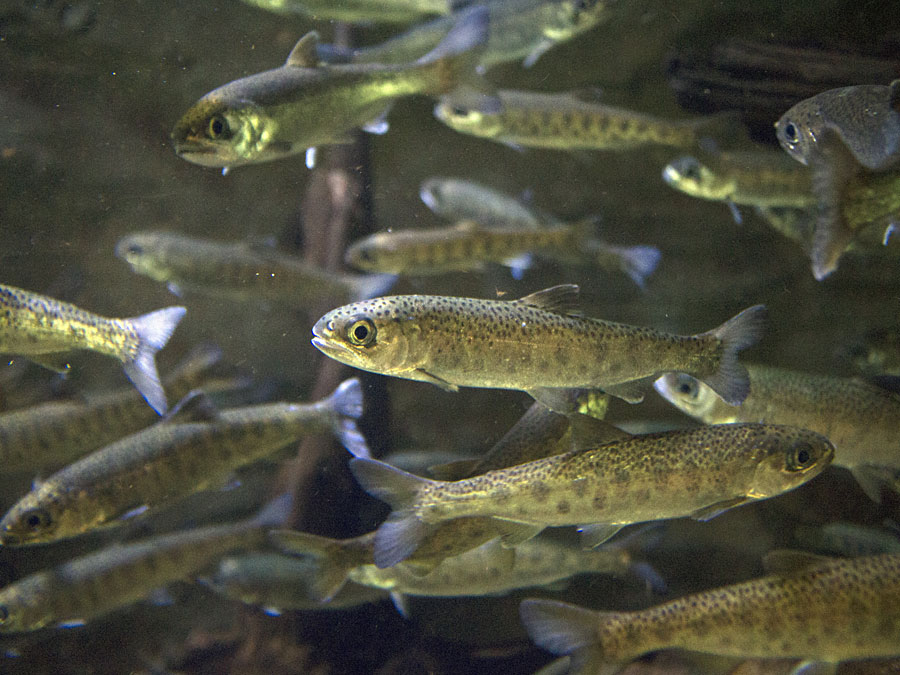 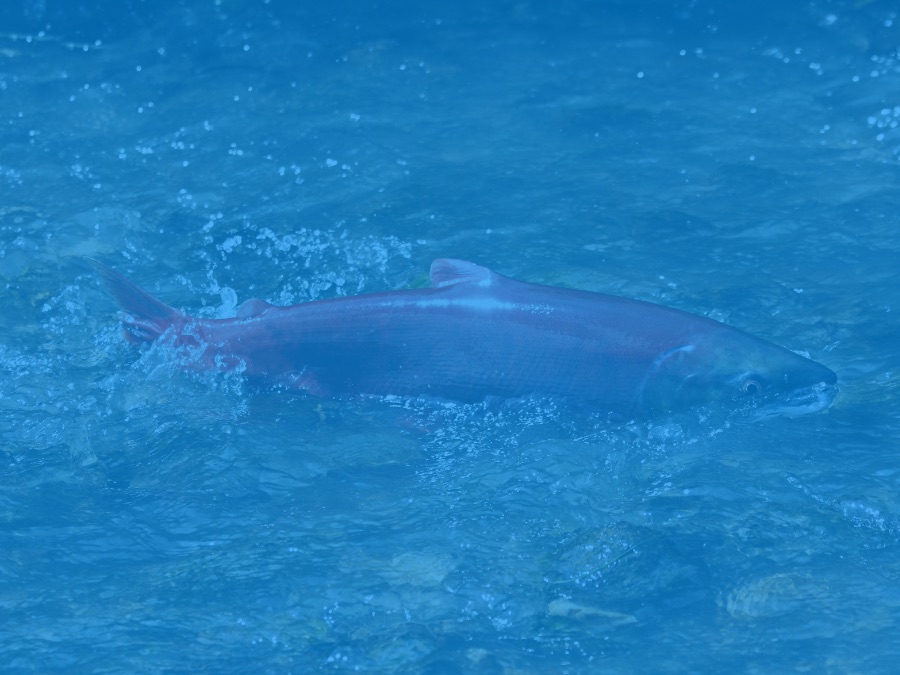 Sockeye are the third most abundant of the Pacific salmon (behind pink and chum) and are a keystone in the North American commercial fisheries. They are also a popular in recreational fisheries. Sockeye salmon have a four-year lifecycle and are among the smallest of the five North American Pacific salmon species. Their succulent, bright-red meat is prized above all others. Like Chinook salmon, they are born in freshwater. However, sockeye require a lake nearby to rear in. Once hatched, juvenile sockeye usually remain in their natal habitat for two years; sometimes longer in colder waters located in northern climates. They then journey out to sea where they grow rapidly for two years, feeding mainly on zooplankton. 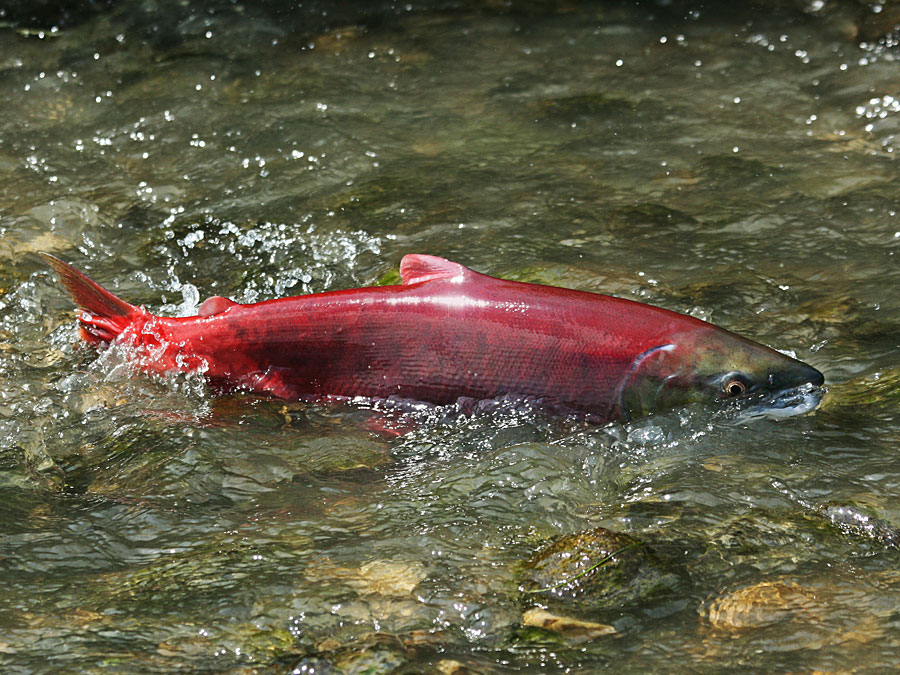 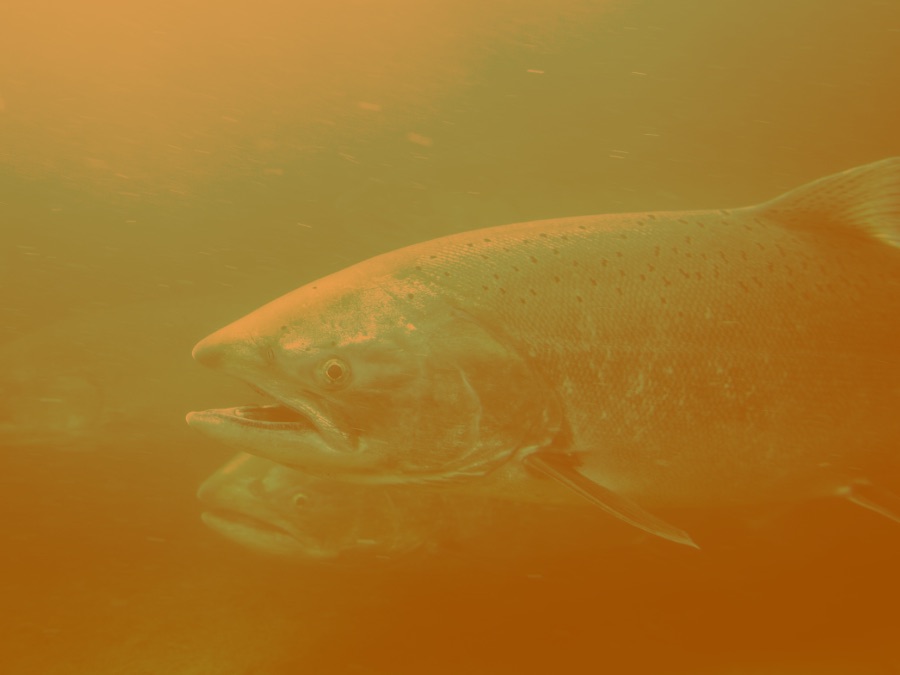 Washington state designated steelhead as its official state fish in 1969. Steelhead are the ocean-going (anadromous) version of rainbow trout. Like most salmon, steelhead return to the Columbia River to spawn. Unlike salmon, they do not spawn upon their arrival to the spawning grounds and then die, but rather overwinter and spawn the following spring. Steelhead can recover and return to spawn multiple times. 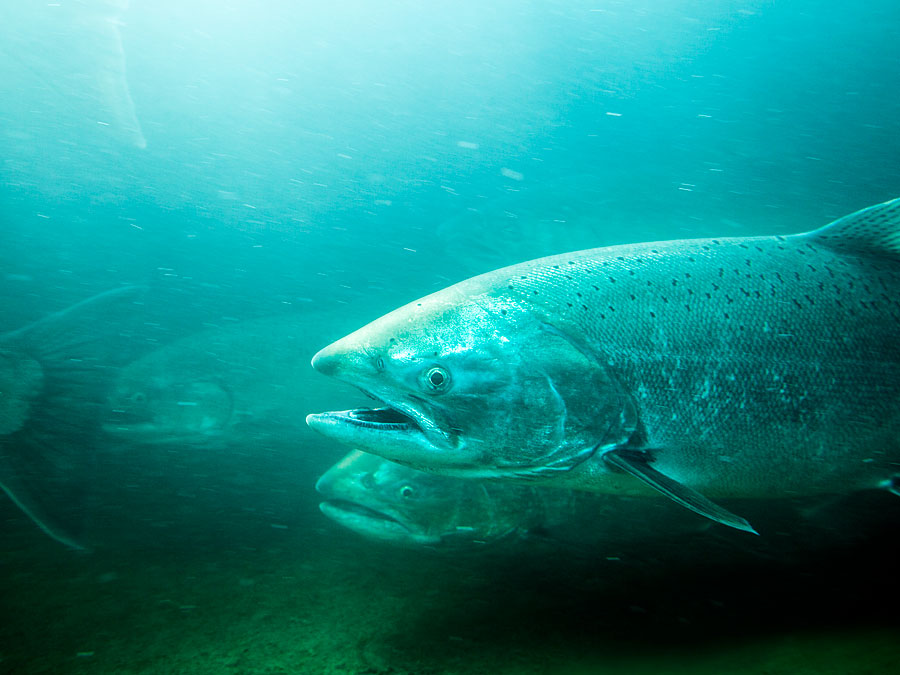 Our commitment to fish and wildlife

To learn more about what Grant PUD is doing to protect fish, wildlife and cultural resources, visit our fish and wildlife page.