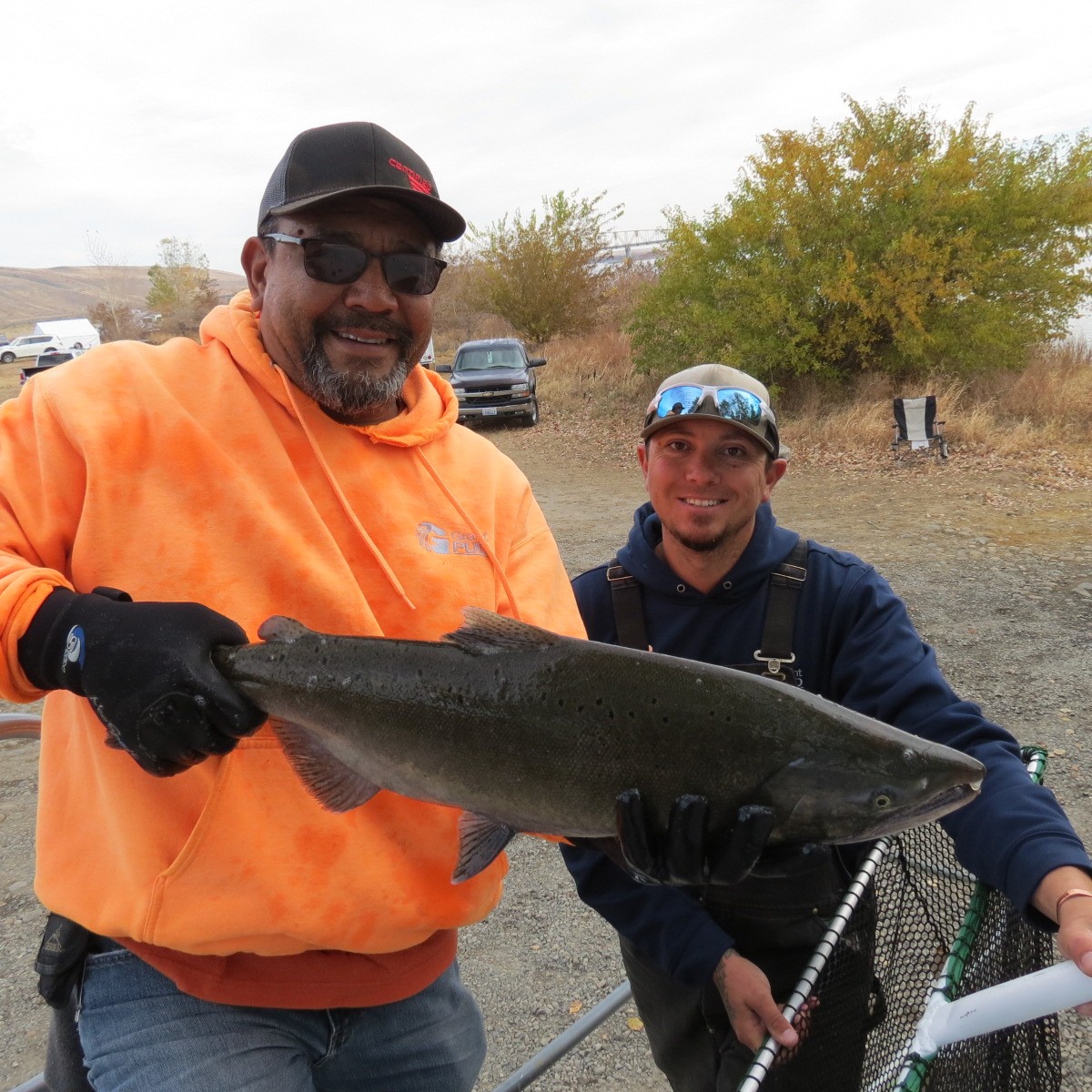 Grant PUD Fish and Wildlife Specialists Alan Suan (left) and Cody Stentz placed the day's catch in a tank truck for transport to the Priest Rapids Hatchery. The fish will be used as brood stock. Click on this photo to watch a video of King of the Reach. 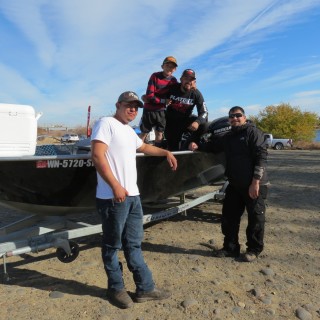 From left, Jose Meced, Alex Herrera, Jose Herrera, Alonso Roque, all of Pasco, fished Oct. 25 at King of the Reach.

VERNITA — Young Alex Herrera pulled back on the rod, the line taught, his back arched against the strain as if he were battling a deep-sea marlin or sail fish.

He may as well have been. A video shot by his uncle Jose Merced shows the 9-year-old from Pasco landing a nearly 3-foot long fall Chinook salmon Oct. 25, the first day of the annual King of the Reach fishing derby on the Columbia River's Hanford Reach.

Anglers at the 3-day derby don't take their catch home with them. The natural-origin Chinook caught are transported live to Grant PUD's nearby Priest Rapids Hatchery to use as brood stock to improve the genetics of the hatchery Chinook raised there for release into the Columbia.

They don't call those big fish "kings" for nothing. The Hanford Reach, a roughly 51-mile stretch from Priest Rapids Dam downriver to Richland, is the only remaining free-flowing portion of the Columbia River. Some 56,000 fall Chinook, each weighing 10 to 50 pounds, spawn there in a typical year, with some years totaling as many as 266,000.

And they don't exactly surrender when hooked — especially to a skinny kid from Pasco.

"I was thinking, 'Don't drop the pole,'" Alex said of the fight, as his fishing-guide dad Jose Herrera tidied his boat after a day on the river. This was Jose's second year at King of the Reach, a tradition he hopes to continue.

"I have a passion for fishing, and this is a good opportunity to help out with the hatchery to produce more fish so my son can fish for salmon when he grows up. It creates a better future," he said. 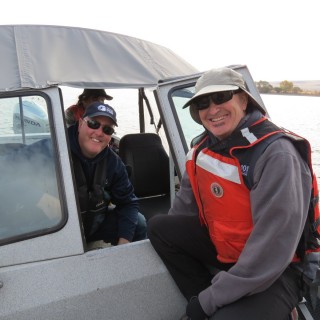 The Washington Department of Fish and Wildlife experts who operate the hatchery for Grant PUD spawn the adults and raise some 7.3 million smolts — baby salmon — annually. These young fish are released into the Columbia River to mitigate for the habitat and flow changes created by hydroelectric dams.

The hatchery crew mixes the natural-origin salmon's eggs and "milt" — the male salmon's contribution to procreation — with eggs and milt from both natural- and hatchery-origin salmon. In this way, the river's Chinook population remains healthy, says Todd Pearsons, Grant PUD's senior fisheries scientist.

The derby is timed to coincide with the time of year fall Chinook return from the ocean to spawn in the Hanford Reach.

"This is our primary source for natural-origin fish," Pearsons said. "Ninety percent of the salmon that spawn here are natural-origin. It's one of the most productive Chinook populations in the world."

Anglers keep their catches alive. "Collection boats" then travel from angler to angler collecting their catch and depositing the live fish into tubs of oxygenated river water to keep them healthy for the ride to shore. The system is designed to keep anglers' lines in the water, hooking fish, rather than making their own trips to shore.

Grant PUD funds and co-hosts the derby, which this year cost $40,000. Other co-hosts are the Washington Department of Fish and Wildlife and the non-profit fishing-advocacy group, Coastal Conservation Association, have hosted the annual derby since 2012. 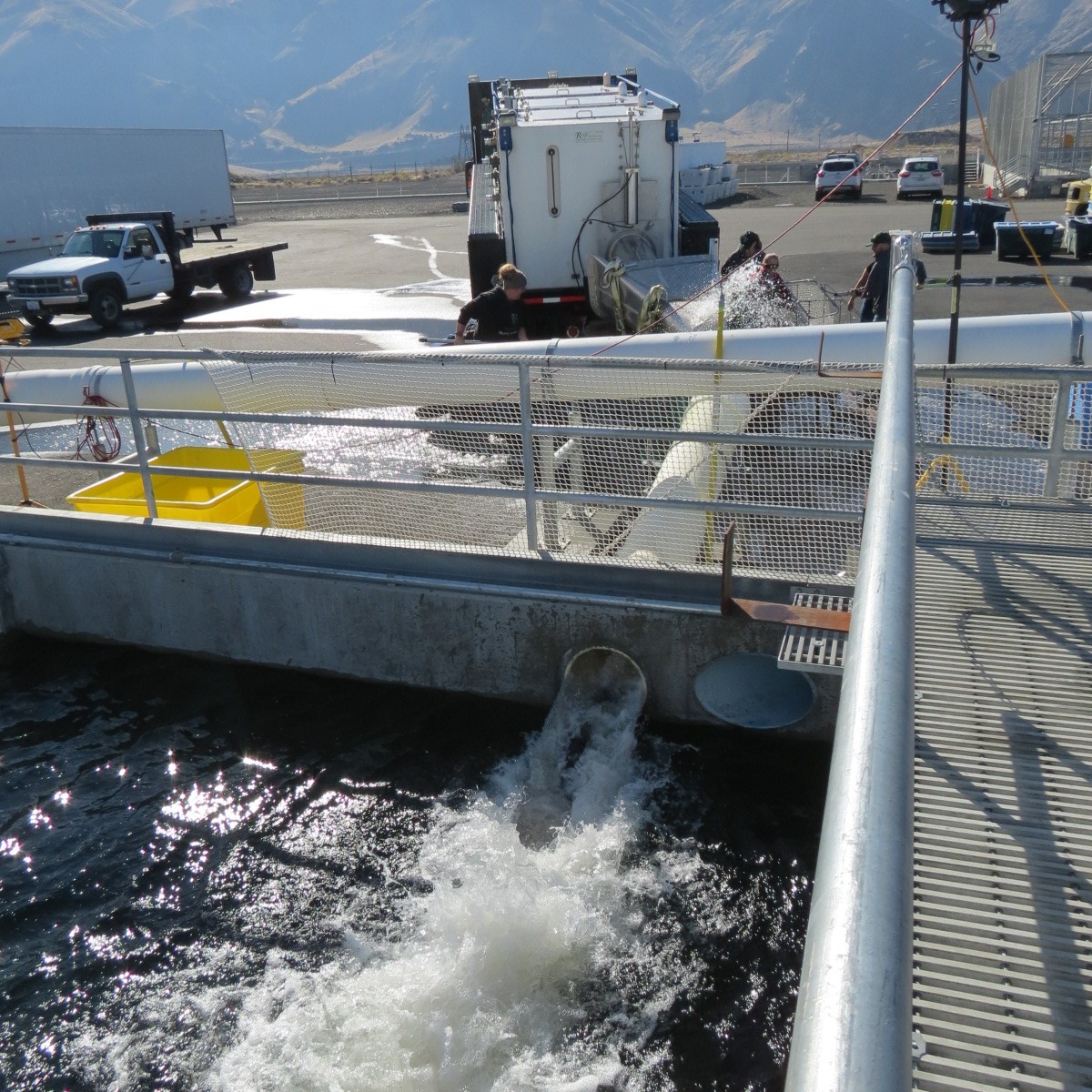 Grant PUD and state Fish and Wildlife hatchery staffers transfer the live Chinook into a holding area at the Priest Rapids Hatchery. 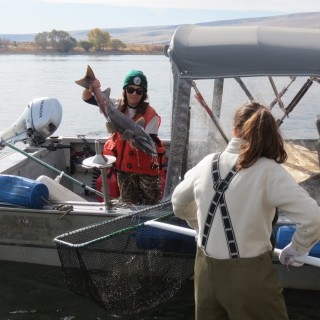 State Fish and Wildlife employees offload live Chinook from the collection boat. The fish will be used as brood stock at Grant PUD's Priest Rapids Hatchery.

Anglers fish an approximately 20-mile stretch of the river, from the vicinity of Vernita Bridge, downriver to the White Bluffs area. They compete for bragging rights and prizes, that include gift cards to outdoor stores, fishing rods, reels and more. Lunch and snacks are provided. Word has gotten out that this derby is a lot of fun.

That first year attracted only 58 anglers and collected only 68 fish. In following years, total derby catch usually totaled between 400 to 500 Chinook.

Registration for this year's event was capped at 100 boats and closed after only four days. Between 300 and 400 anglers caught 1,546 Chinook, most of which were natural-origin.

All salmon have an "adipose fin" – a small fin on the fish's back, near the tail. This small fin is clipped from hatchery fish before they're released into the region's rivers and streams. That's how anglers can tell the difference.

"For a lot of these guys, the fun in fishing is the catch," said Rich Coleman, treasurer for the Coastal Conservation Association's regional chapter. "One boat here today caught over 20 fish."

WDFW biologist Steve Richards agrees. "These guys, they want to fish," he said. "Some folks think they're giving back to the resource. Some folks just think it's a great chance to hook fish."

"And," added Grant PUD Fish and Wildlife Specialist Cody Stentz, "you don't have to clean them."