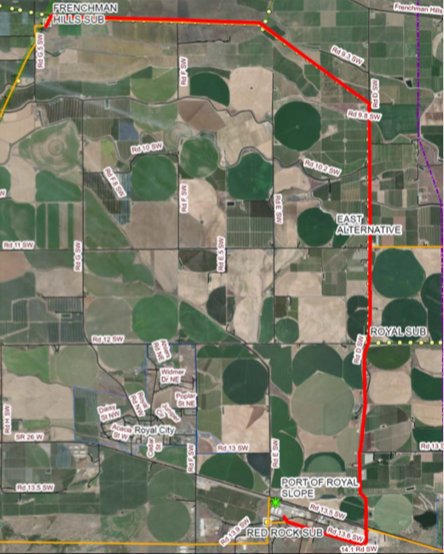 The route for a new 115-kilovolt transmission line near Royal City has been selected. Following extensive analysis of numerous route segments, public input regarding the three proposed route options and an economic review of the final two route considerations, Grant PUD staff and engineering consultants chose to follow the proposed "Eastern Route" option for the transmission line.

The new route will originate at the Frenchman Hills Substation then parallel an existing 115-kV line for most of its length. The new transmission line will connect into the future Red Rock Substation, which will be built near the Port of Royal Slope.

The transmission line is needed to meet the growing power demands in the Royal Slope area and is part of Grant PUD's second round of "Design Build," a multi-year package of projects to improve reliability and increase capacity of Grant PUD's electrical system.

Grant PUD's project manager, David Klinkenberg told commissioners on Tuesday that the Eastern Route was the preferred choice of the public based on input and comments received during two public hearings.

Klinkenberg said consensus from the hearings showed preference for the Eastern Route's use of the existing corridor currently used for the Frenchman to Royal 115kV Transmission Line.

Construction cost of the Red Rock Transmission Line is estimated at $10 million. According to a financial analysis of the project this is $3 million more than the estimated cost it would take to construct the "Central Route," which was the second preferred route.

The Eastern Route results in a higher up-front cost but avoids future costs that would be required to rebuild the Frenchman to Royal Transmission Line at a future date.

Construction completion of the Red Rock Transmission Line is estimated to occur in 2022.

See the full presentation here on pages 84-96 and listen to the discussion which begins at 2:17:30 on the commission audio.

How to participate in digital commission meetings

Grant PUD commissioners and staff will be meeting "virtually" – using videoconferencing software — until Grant PUD managers, in cooperation with the state and local healthcare officials determine risk has subsided from the COVID-19 pandemic. Grant PUD commissioners and staff continue to meet on schedule, the second and fourth Tuesday of each month. This information is posted and updated weekly at grantpud.org/commission-meetings.

Commissioners asked for clarification Tuesday about how the public can participate via the virtual meeting format. The public can listen in on commission audio as the meeting is happening by calling an access number and punching in the meeting's conference ID number. Both the phone number and conference ID are posted on the week's commission meeting notice, linked above. The videoconferencing software will identify each caller by his/her phone number. Callers should keep their phones on mute, unless speaking during the public comment session.

No action items were on Tuesday's agenda.

— Heard an update on Grant PUD's Safety and Health Improvement Plan (SHIP), a roadmap to improve policies and practices for better health and safety of employees, contractors and visitors. Senior Manager of Industrial Safety Craig Bressan reviewed progress made on employee training, job-hazard reporting, jobsite reviews for safety and health hazards, audits to gauge progress and a better data base for accurately collecting data and tracking trends.

"This will allow us to collect more and better date to truly trend to find what we need to see." Bressan said.

See Bresssan's presentation on pages 13-29 of the presentation materials here. Hear the discussion at 31:00 on the commission audio.

— Heard from Grant PUD Security Manager Fallon Long that she and her team are monitoring an increase in acts of vandalism to Grant PUD facilities, year to date. Eight incidents have been reported so far this year to facilities linked to either the dams or electric system. That's up from two incidents over the same period in 2019. They're tracking the incidents and reporting them to law enforcement, she said.

The Security Department's $1.9 million budget this year includes adding "analytics" to Grant PUD security cameras to improve detection of suspicious activity, including vandalism, and dispatch either law enforcement or the District's own personnel to affected area in real time. Project cost is $650,000, Long said. Work on $2.27 million in improvements to door, gate and other types of perimeter security are also ongoing to replace an aging system.

January's staff training in setting up and maintaining an "incident command" system based on a standardized, federal framework "couldn't have happened at a better time," Commission President Tom Flint told Long and fellow commissioners. That same framework has been steering District actions during the COVID-19 pandemic.

See Long's presentation on pages 31-37 of the presentation materials here. Listen to the discussion at49:50 on the commission audio.

Last year Grant PUD received a $100,000 grant from Microsoft to provide county residents with a mobile educational experience. Grant PUD used that funding to purchase and furnish the technology van and will use the vehicle to help with the group's existing educational outreach activities. The technology van will provide an interactive learning experience for participants to understand more about various topics ranging from hydropower to fiber internet.

See the full presentation on pages 38-54 of the presentation materials and hear the discussion which begins at 57:30 of the commission audio.

— Had a follow-up discussion on the staff proposal March 10 toward a "wheeling rate" — the cost transmission customers would need to pay to help Grant PUD cover its transmission costs, including maintenance and expansion of the lines that carry the power.

Grant PUD staff have proposed a transmission cost that includes a 9.8% "return on equity" to ensure rates cover not only costs to maintain the existing lines, but also create a fund for line improvements and expansion as the local energy demand grows.

Representatives from Grant County irrigation districts, the Federal Bureau of Reclamation and the Bonneville Power Administration say the staff proposal would increase energy costs to transmission customers, including irrigators, by 30 percent. They repeated the objection they expressed at the March 10 meeting that Grant PUD's model for calculating the amount of return on equity was too high and based on experiences from two for-profit, investor-owned utilities. They're urging commissioners to reject the staff proposal for calculating return on equity.

General Manager Kevin Nordt said Grant PUD staff will study the comments and get back to the agencies in two-to-three weeks and include examples other public utilities have used to help determine costs.

"This equity cost is a real cost," Nordt said. Without a suitable return-on-equity "cushion" the District's ability to invest and expand is compromised. If wheeling costs aren't increased to the key users of Grant PUD transmission, he said, Utility staff would have to study which other customers would have to pay more to make up the difference.

"I do understand the significance of doing something," Commissioner Larry Schaapman said. "It's time for us to get this nailed down."

"Part of our strategic plan is to have stability in our rates. It's something we all value highly," Commission President Tom Flint told Nordt. "We have to understand the potential economic risk we may have. We'll look forward to what you and the staff come up with."

Staff should be back in front of commissioners with a follow-up discussion in early May. A vote on the proposed wheeling rate likely come in late May, Nordt said.