Coleman makes the most of GM for the Day opportunity

Jeremy, a hydro mechanic at Wanapum Dam, was the winner of the grand-prize drawing during the Employee Appreciation event in September. That grand prize was to be GM for the day and experience the life of Kevin Nordt. The activities were to be tailored to fit whatever the "GM" wanted. Jeremy chose to learn more about something other than what he is used to — the other side of the house, Power Delivery.

Jeremy's day started with his specially marked parking spot at HQ. He then entered his "office" and met with his CXO staff and Executive support team. There was a review of Jeff Bishop and Dave Churchman, along with a little bit of coffee, then on to the first stop of a full day of activities.

Jeremy, accompanied by Kevin, visited Dispatch, the Electric Shop, the Meter Tech Shop, the Line Shop, Fiber and the Electronic Techs (in the penthouse suite of the main building no less) to learn a bit about what the foreman and other personnel do in each of their areas. He said It was interesting to talk to them in their work areas to understand and appreciate the similarities and the differences between Power Production and Power Delivery.

After Jeremy's morning tour, the next item on the agenda was to lunch with Commissioners Larry Schaapman and Nelson Cox. It was a valuable opportunity to get to know what is important to each other and what drives them to do what they do.

In the afternoon Jeremy had requested a tour of an industrial customer, with SGL being at the top of his list. SGL is a carbon-fiber manufacturing plant and one of our larger power users. During the impressive tour of the plant near the Grant County airport, Jeremy and Kevin, as well as Chuck Allen, Public Affairs supervisor and Annette Lovitt, president of the Grant PUD Employee Association and current Moses Lake Chamber president, learned how SGL makes carbon fiber.

The process turns what starts as a polyacrylic strand that is one-seventh the diameter of human hair into a high-quality carbonized, extremely strong, strand for numerous applications. The carbon fiber plant was originally created as a partner project with BMW for their i series automobiles but has evolved to include many other applications from aerospace to sporting goods and even the spines of the blades of wind generating units.It was especially impactful when Joseph Akers, the head of operations at SGL, stated the major reason SGL was in Moses Lake was because of hydropower and the 100% green footprint that they wanted.This was one of Jeremy's major "aha" moments — what he and his co-workers do at the dams is key to employing 160 people in our community.

The day ended at the Rocky Ford Transmission substation.Another impressive display of how linked we are with the Western U.S. and all of the players – and how hard it is to call for a Transmission outage to just change a lightbulb that may be out!

In talking with Jeremy as we headed back to HQ what really rang true with him was that we may all have different jobs in Grant PUD but we are all needed to make Team Grant the best possible.This opportunity to spend time with Kevin, and for Kevin to spend time with Jeremy, goes such a long way toward helping management and workers understand and appreciate one another. 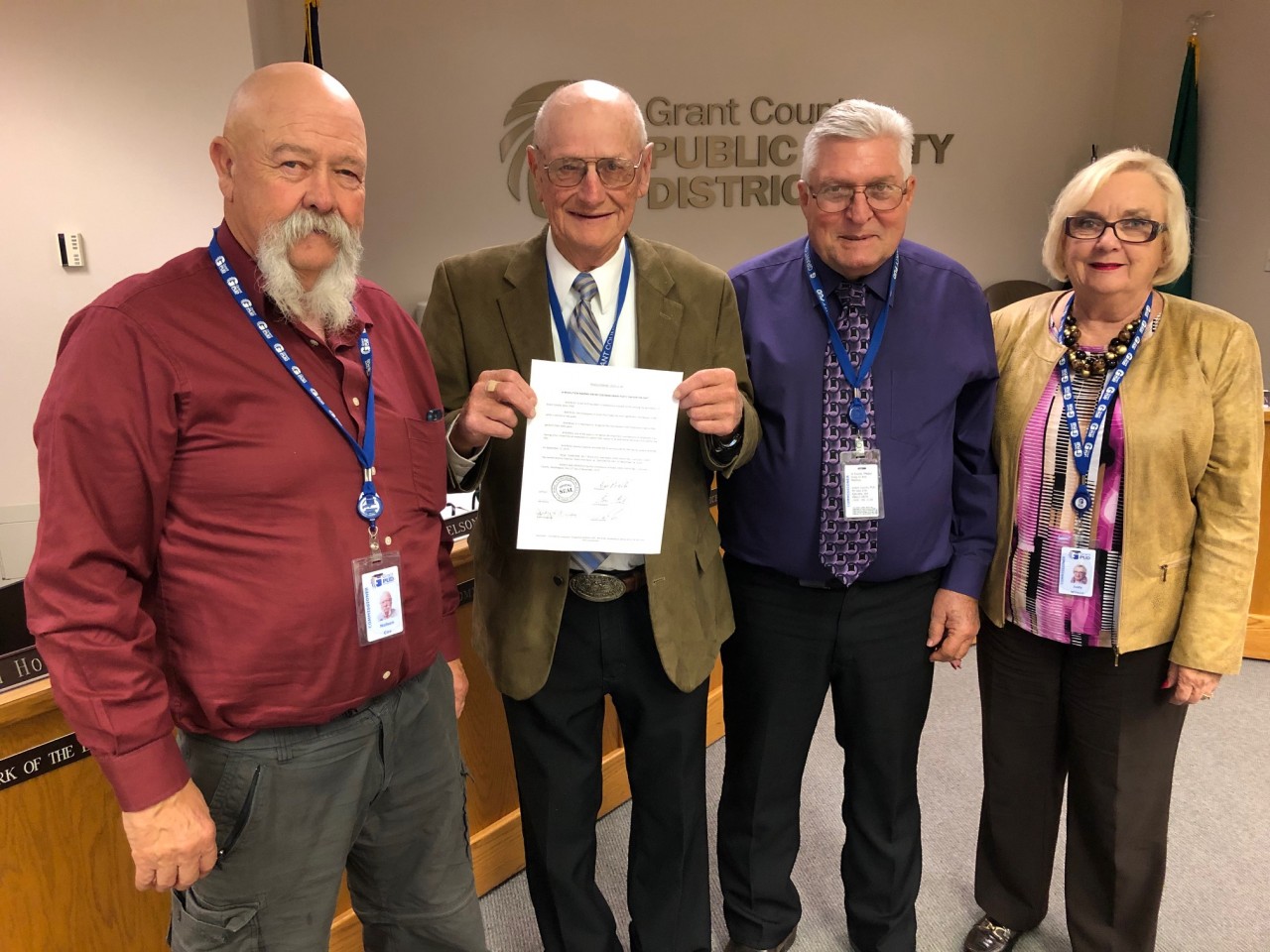 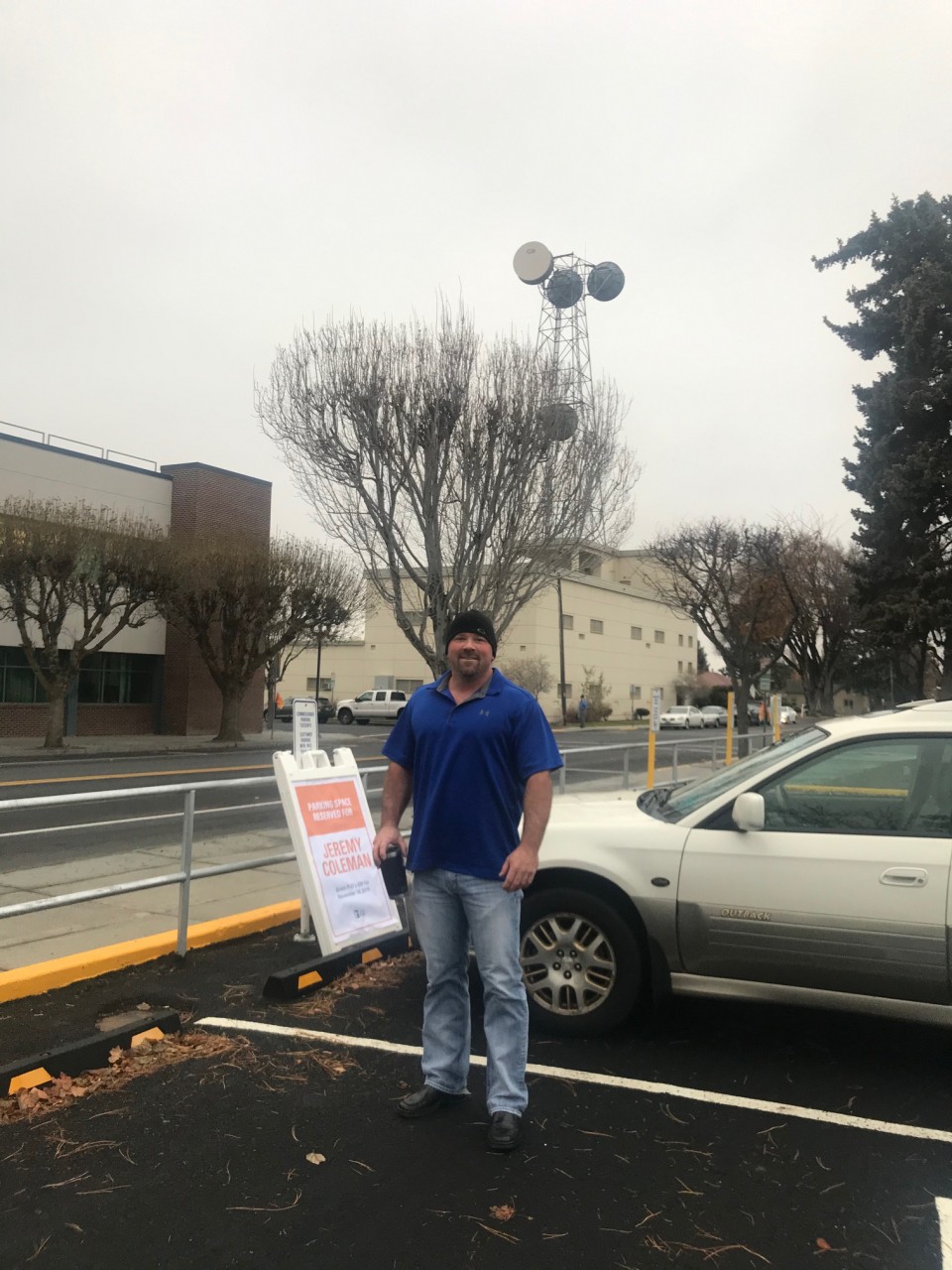 Coleman got a spot right up front. 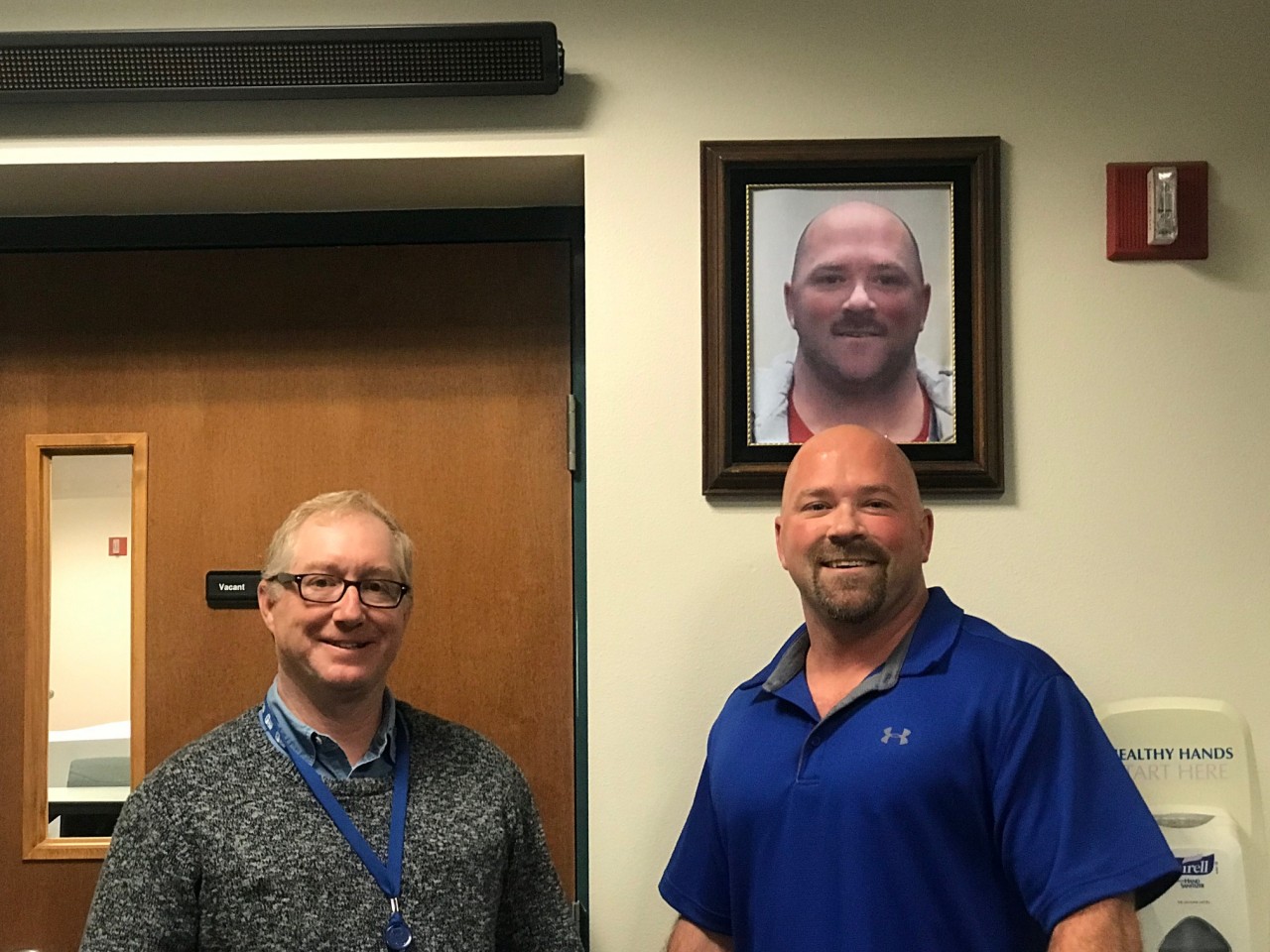 For one day, Jeremy Coleman's photo was greeting visitors to the Ephrata Headquarters building. 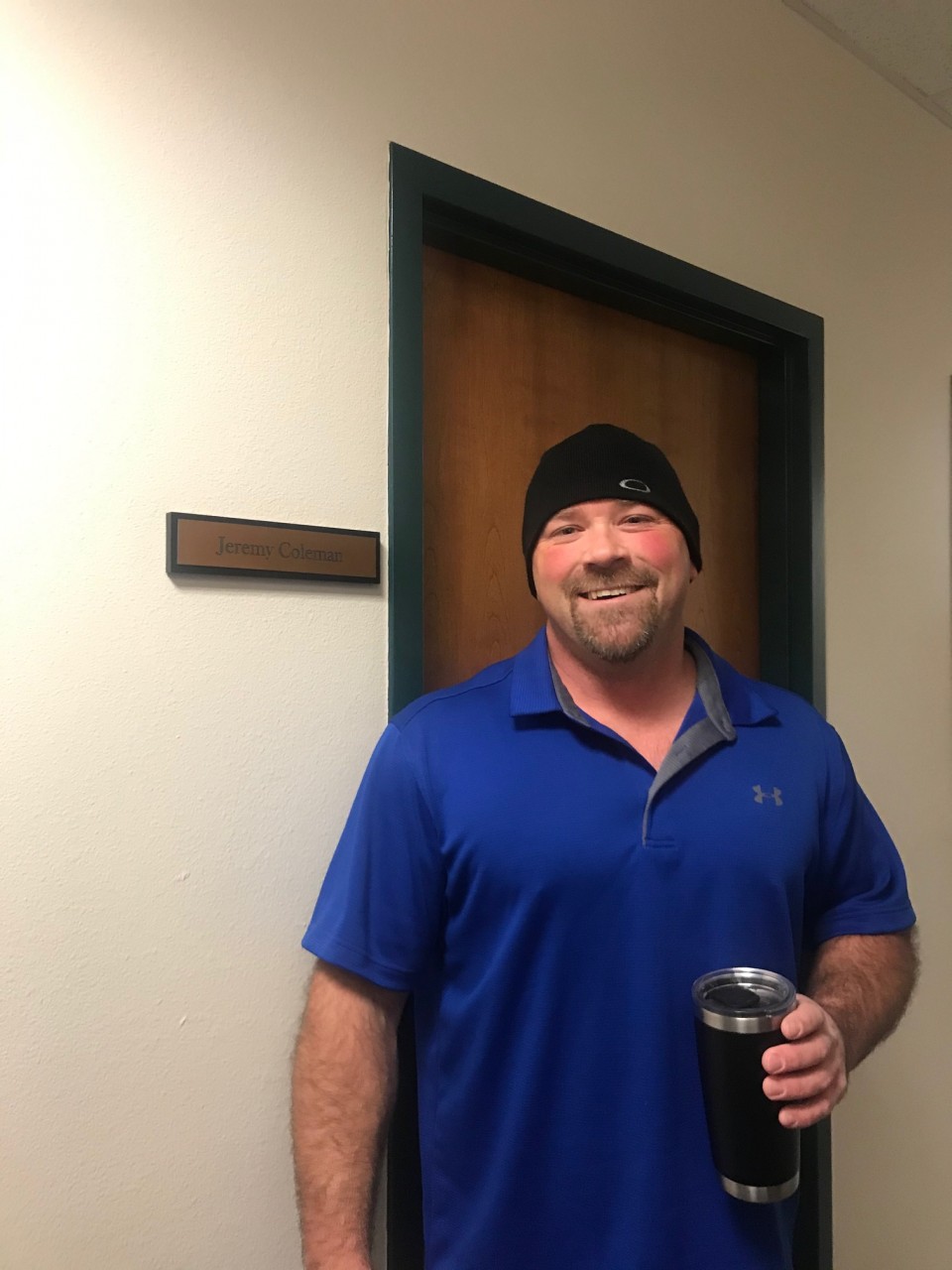 Coleman got to take over Kevin Nordt's office for the day. 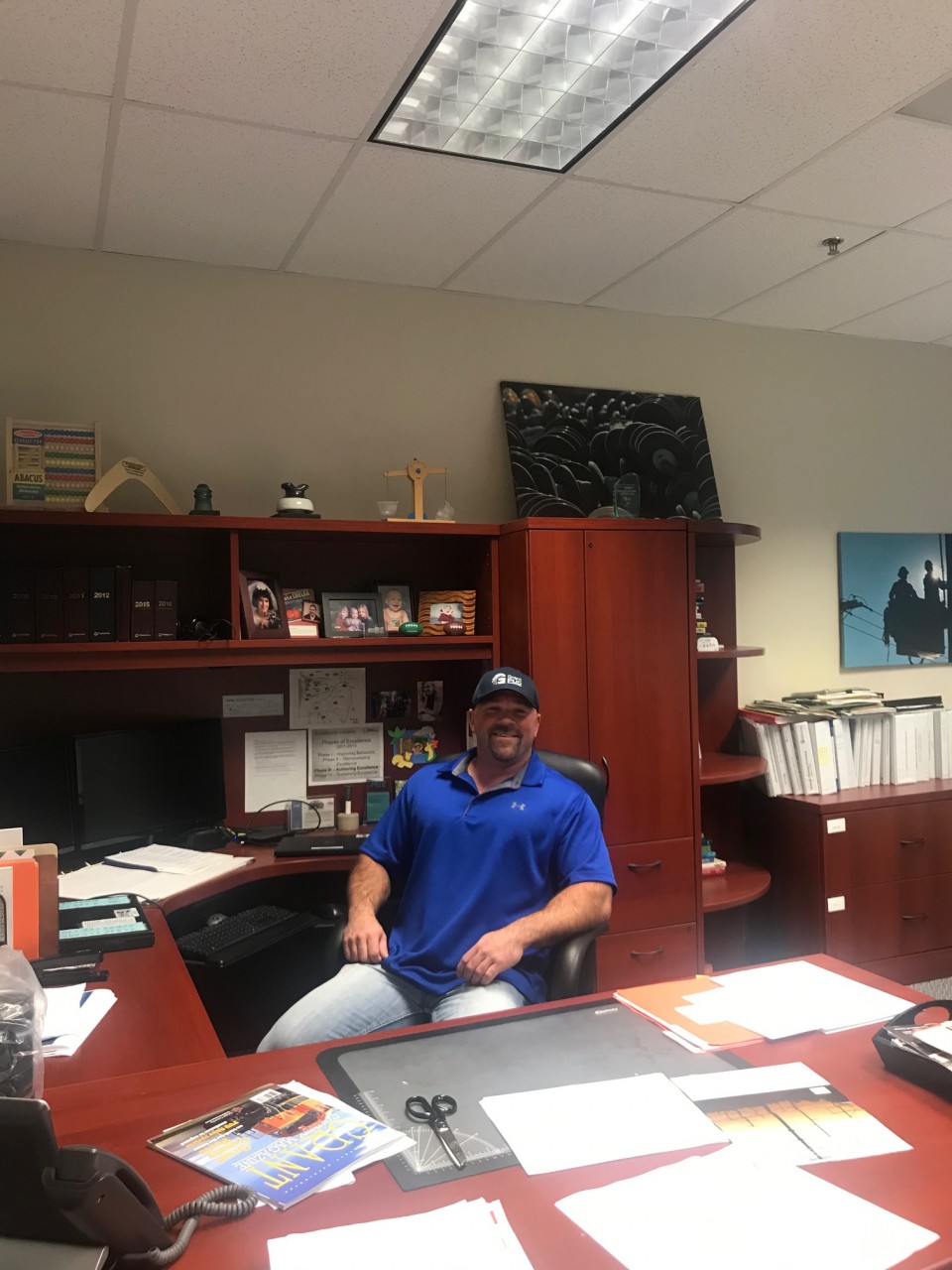 Coleman gets comfortable in the GM's office. 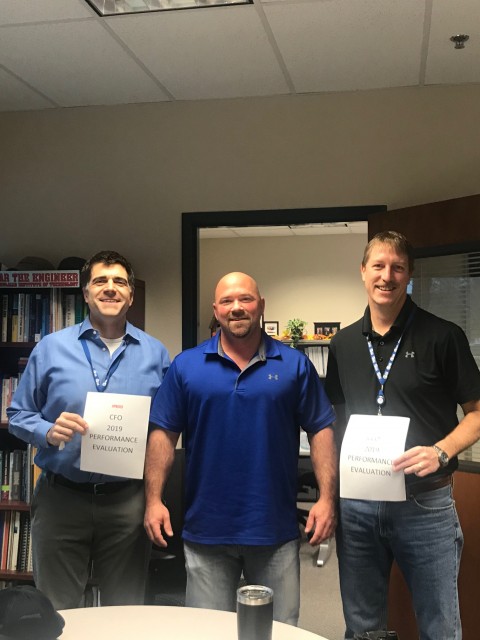 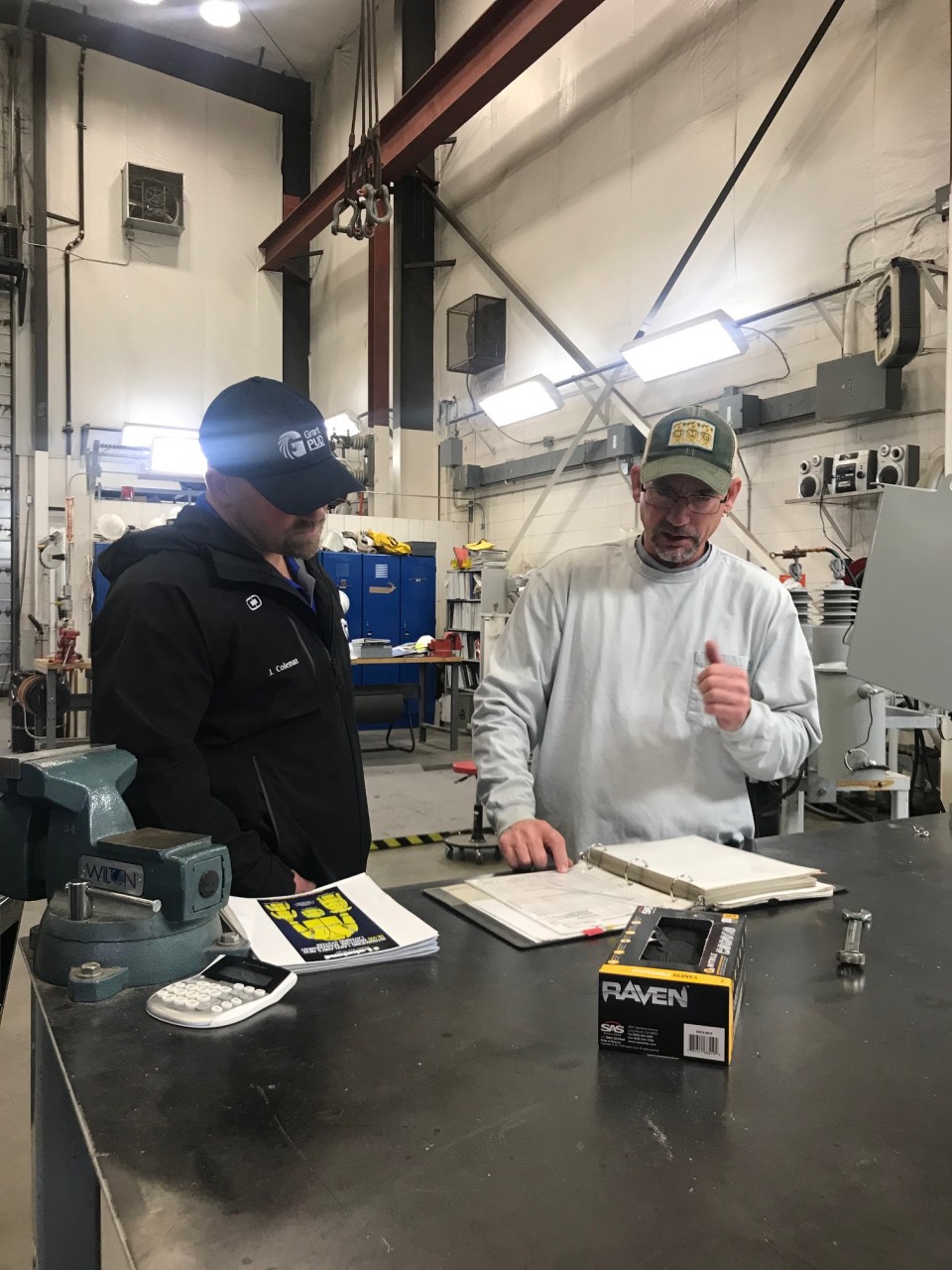 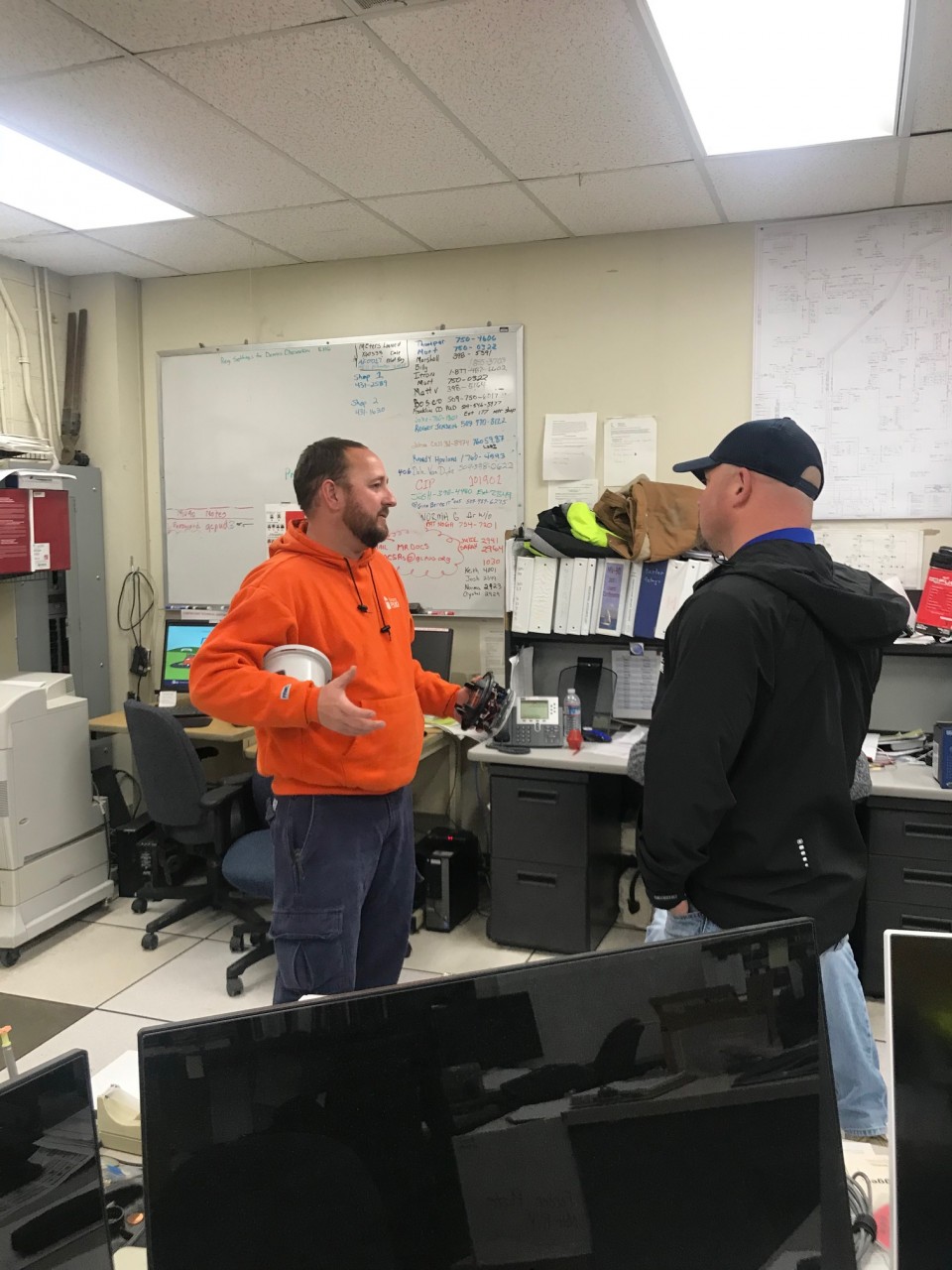 Adam Schwab talks to Coleman about the work done in the Power Deliver Meter Relay Department. 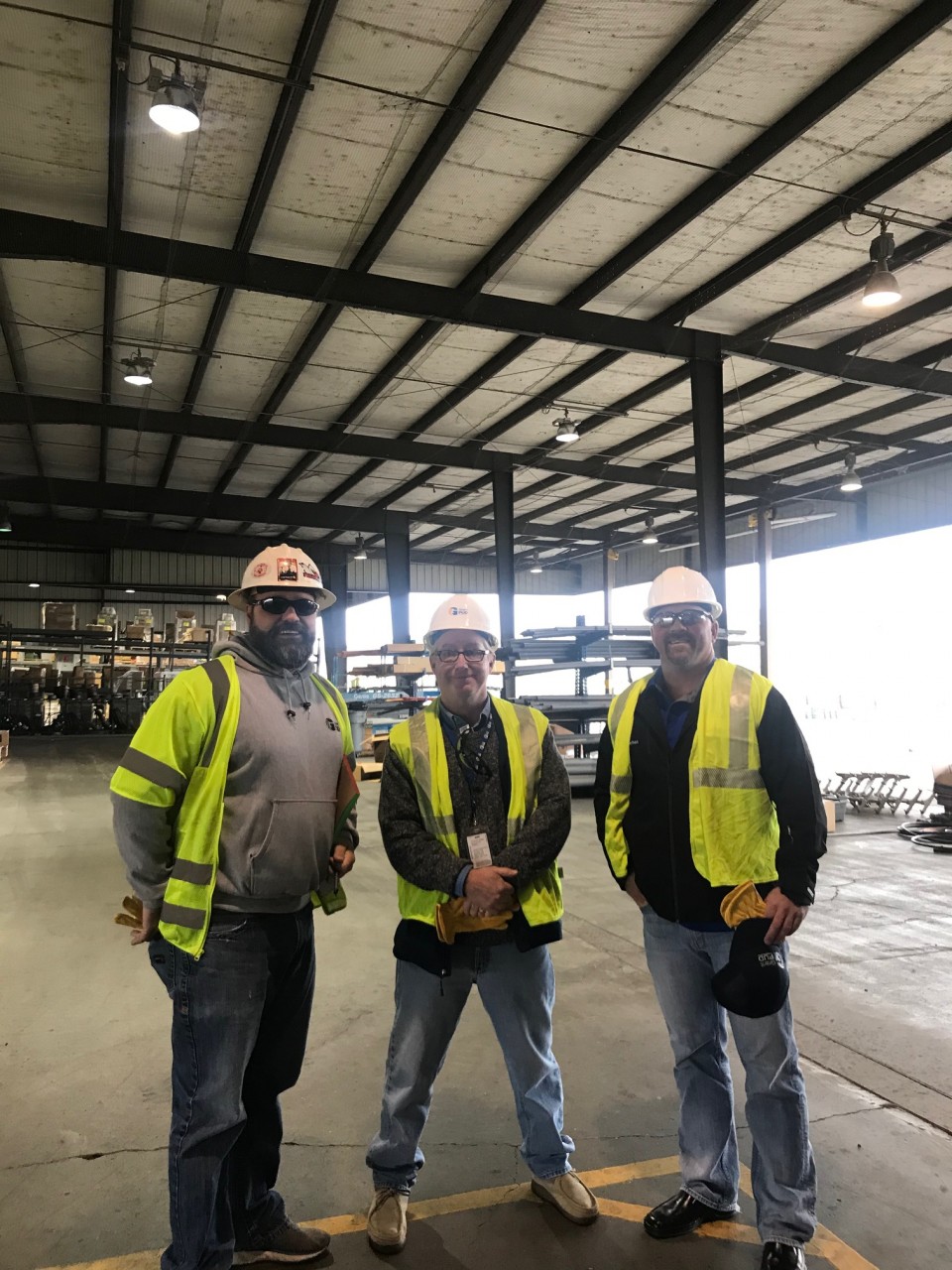 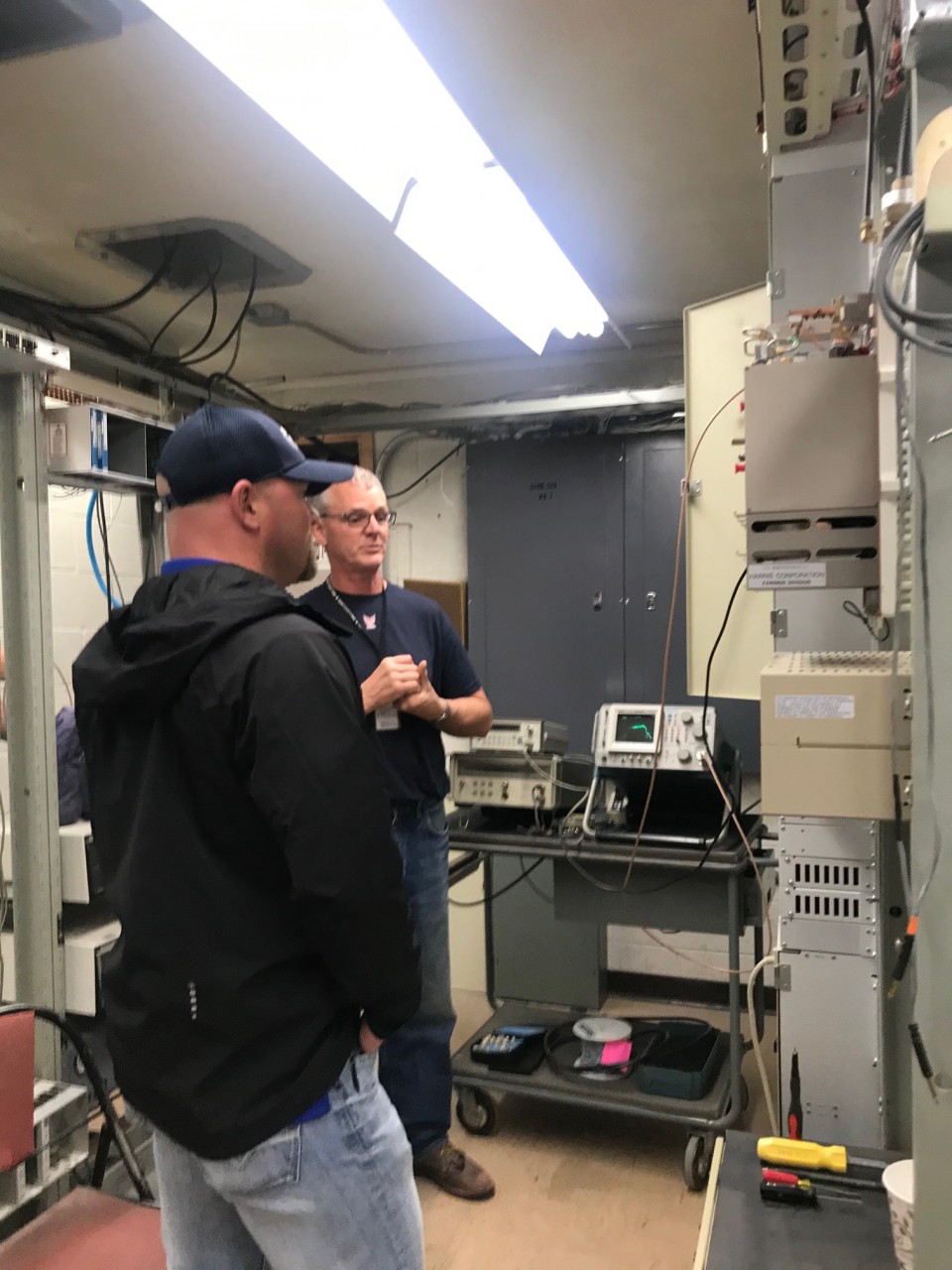 Electronic Tech Foreman Keith Niehenke shows Coleman some of the communications equipment used by the district. 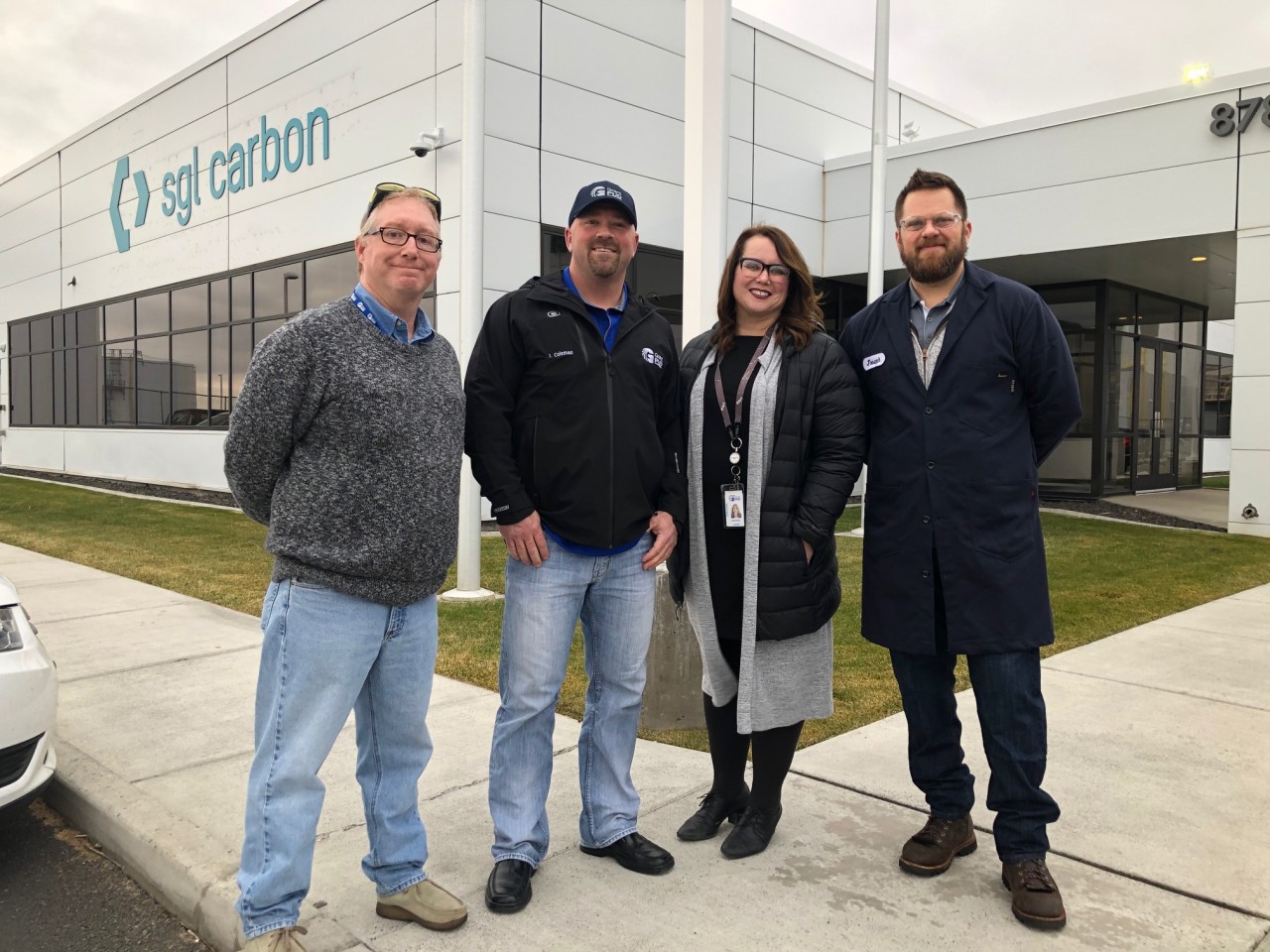 Kevin Nordt (from left), Jeremy Coleman and Annette Lovitt take a tour of SGL Carbon in Moses Lake with Joseph Akers as their tour guide. 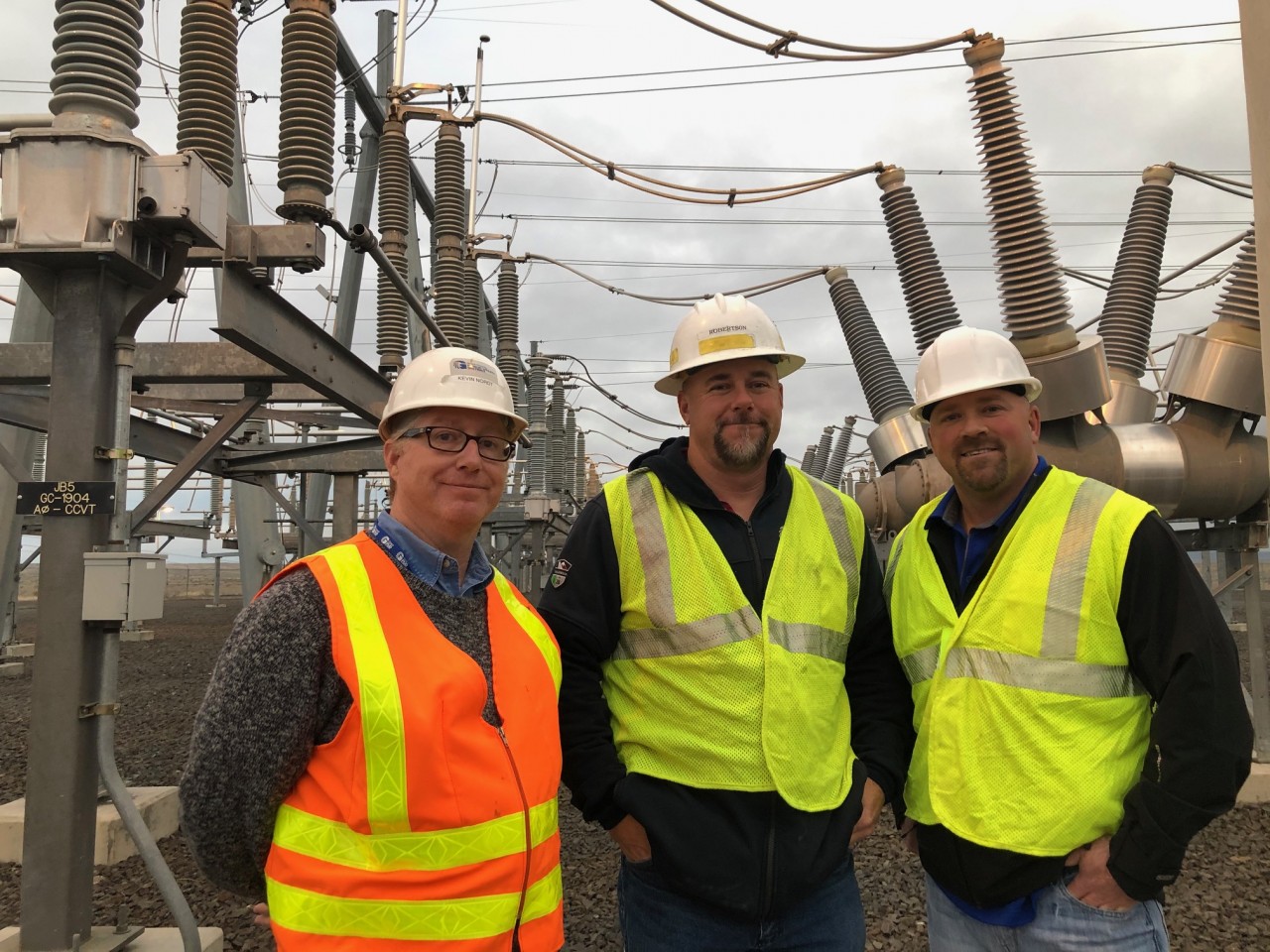