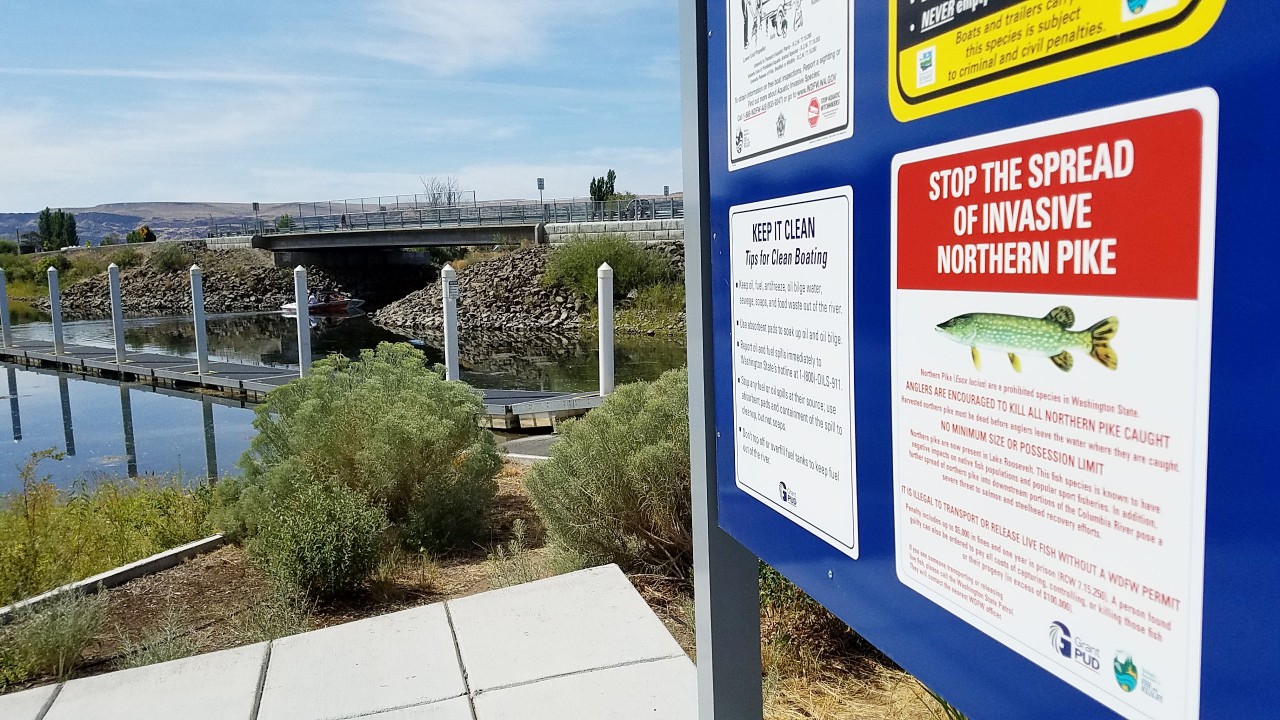 Northern Pike have yet to be found in the Columbia River below Grand Coulee Dam, but Grant PUD has posted warning signs in all its Columbia River recreation areas -- just in case -- for anglers to be aware of the fish, report any catches and remove them from the river. Grant PUD photo.
By Christine Pratt, Grant PUD Public Affairs
LAKE ROOSEVELT — Enjoy fishing for salmon? Then please help eradicate the invasive Northern Pike.

The Grant, Chelan and Douglas PUDs are contributing to an effort by tribes and state agencies to control this voracious predator that, if not contained, could set back decades of salmon recovery efforts across the Pacific Northwest.

Females can lay more than 10,000 eggs at a time — far more than the approximately 3,800 laid by many salmon — and the young grow faster than other fish. Pike eat everything, including juvenile and adult salmon and smaller members of their own species. Humans are their only predator.

"These things are nasty, voracious predators," says Grant PUD Lead Biologist Mike Clement. "This is a critter we don't want anywhere near salmon."

The invasive Northern Pike is not the same as the Northern Pikeminnow, a smaller predator of salmon that is native to the Columbia River and also subject to extensive efforts to reduce its population.

The Northern Pike (Esox Lucius) is an elongated fish with a duck-like bill and rows of sharp teeth. In the Columbia River it is found only in the 130-mile long Lake Roosevelt — the reservoir behind Grand Coulee Dam — and the rivers that flow into it. The fish could make it downstream when the dam spills water and even become established in Columbia Basin Project irrigation canals.

"These things are nasty, voracious predators. This is a critter we don't want anywhere near salmon."

A native of Eastern Canada, the Northern Pike has spread to the Spokane River and Idaho's Pend Oreille and Coeur d'Alene rivers, which all drain in to Lake Roosevelt. It's managed as a game fish in Idaho and Montana.

Scientists who study watersheds where Northern Pike have become established have noticed a decline in the numbers of other species.

Studies show the pike in Lake Roosevelt arrived in 2009 — within five years of its arrival in the neighboring states — and share the same DNA as those in the Pend Oreille River, Holly McLellan, principal biologist for the Colville Confederated Tribes, said in an email.

In May 2019, Colville tribal anglers caught a 28-pound female pike in the Sanpoil River, a tributary of Lake Roosevelt some 17 miles upriver of Grand Coulee Dam.

Funded by Grant PUD and other partner agencies, the Colville Tribe, along with the Spokane and Kalispel tribes, are monitoring the Columbia's downriver reservoirs by surveying anglers' catches and testing water samples for the fish's DNA. So far, Northern Pike have not been detected below Grand Coulee Dam. But many fear it inevitably will be.

"At this rate we expected Northern Pike to arrive at Wells Dam by 2018, if no action were taken to suppress populations in Lake Roosevelt," McLellan said.

Northern Pike spawn from February through November. The tribes with support from their agency partners conduct mass gill-netting efforts at the mouths of the Sanpoil, Kettle and Spokane rivers to catch and destroy these fish before they head up these rivers to spawn.

Since 2015 approximately 10,500 pike have been removed from Lake Roosevelt, McLellan said.

Policy makers in Oregon and Washington have expressed their concern, McLellan said. Since then, Idaho has changed its fishing regulation to no bag, size or possession limit for Northern Pike. Montana has a 10- or 15-day catch limit, depending on where the fish is caught in that state.

The tribes and agencies also offer a buy-back program.

Anglers who catch a Northern Pike from Lake Roosevelt, the Kettle River, or the reservoirs behind Chief Joseph and Wells dams — where they've yet to be found — will receive $10 for every pike head they drop off at designated locations around Northern Washington.

Since the program began in 2017, more than $19,000 has been given away to anglers, McLellan said. Anglers need a fishing license, but no catch limit exists on pike.

Operators of every other dam on the U.S. portion of the Columbia River spend tens of millions of dollars annually on salmon passage, rearing and survival.

Biologists like Grant PUD's Clement, who work for dam operators far down river of Grand Coulee, are watchful and concerned the result of decades of spending and research could end up in the belly of this invasive pike.

The reservoirs behind Grant PUD's Wanapum and Priest Rapids dams are 174 and 194 miles from Lake Roosevelt, yet signs are posted at Grant PUD's boat launches warning anglers to remove from the river and report any Northern Pike they happen to catch.

The Ephrata-based Grant PUD has an extensive predator-control program in place to remove salmon-gobbling species like Northern pikeminnow, bass and walleye.

"We would expect to collect Northern Pike if they were to become established in the mid-Columbia," Clement said. "The future of salmon fishing on the Columbia could depend on it." 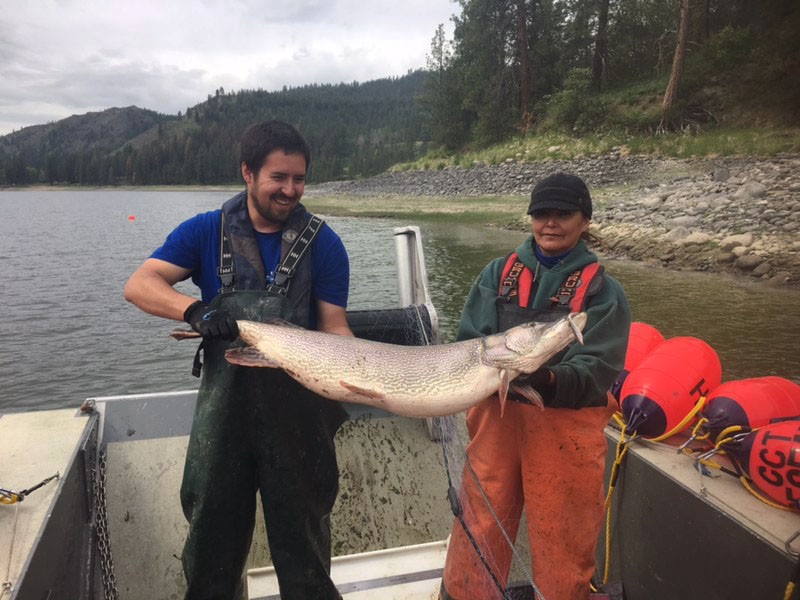 How you can help:

1 Never move live fish from one water body to another.

2. Know how to spot/identify the Northern pike. If you catch one, keep it and report it to the Washington Invasive Species Council

3. Take advantage of the the Colvilles' buyback program