Mar 19 Posted by Lindsay Thompson in News
The crews at Wanapum Dam and our contractors marked a huge milestone in Columbia River hydropower this month by completing the rehab and installation of the final of the dam's 10 turbine/generator units.

Upgrade work began in April 2004 with replacement of each unit's turbines. Work to rebuild the generators began in June 2010 with the 7th turbine. The old turbines and generators these upgrades replaced dated to when the dam first began generating in 1963. The completely rehabbed units should be in service for another 50 years.

​"The big thing is, I don't know what I'm going to do after this, because I've been on it so long."

Electrician Foreman Todd Young has been involved in the project almost from the beginning. "The big thing is, I don't know what I'm going to do after this, because I've been on it so long," he said. "It's kind of sad for me, because it's done. It's been a good job. It's been one of the longer projects they've done. It feels good being part of that."

"The credit for this accomplishment goes to all of the crew and staff who have contributed to this effort, some for the entire 16 years," said Stuart Hammond, Grant PUD engineering manager. "This includes the mechanics, electricians, technicians, laborers, engineers, engineering technicians and all the other employees who've supported this effort over the years. Every one of them deserves recognition and appreciation for a job well done and improving the condition of the Wanapum powerplant for the next 50 years."

The new generators have increased in size to 128.6 megavolt amps of power, compared to each of their predecessors' 109.3 megavolt amps rating. The "new" (in "turbine years") turbines are designed to improve the passage of baby salmon headed downriver to mature in the ocean. These upgrades are of big benefit for Grant PUD, our customers and the environment.

The turbines were supplied by German international firm Voith, the generators supplied by Alstom, which is now part of General Electric. They contain parts manufactured around the world, including turbine shafts, hubs and blades made in Romania, and generator rotor and stator components made in Europe and Canada.

Thanks to everyone who made this project a success, and to Engineering Manager Stuart Hammond (inset photo) and Engineer Jeff Niehenke for help with this report. — Christine Pratt, Public Affairs.
​ 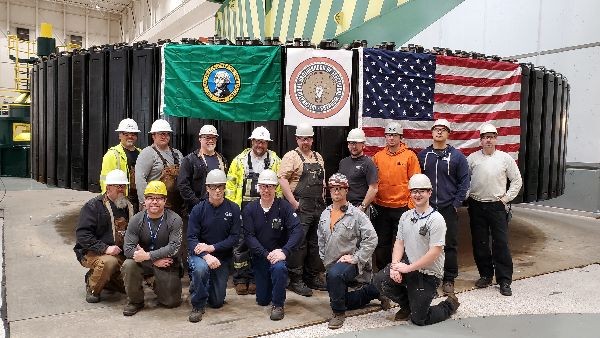 A crane drops the final unit's stator into place a couple weeks before the above rotor was installed. The total weight of the stator and picking beams is 242 tons. The total weight of the rotor and picking beams is 427 tons.The old turbine/generator parts, now replaced, dated to when the dam began generating electricity in 1963. 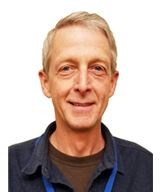